Facebook has started rolling out its redesigned desktop, which has a brighter icon and less cluttered look from today. The new design will place a significant emphasis on the two critical features provided by the social media giant, Facebook i.e., Groups and Events, and the users can have the option to choose the new design from today. According to a spokesperson of Facebook, most of the people active on the social media giant will get access to the unique design of desktop, and the users can try out the new model until it becomes default later in the current year. 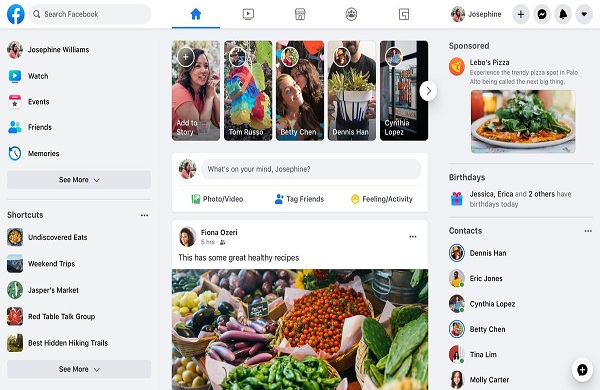 It is worthwhile to know that the redesign introduced in the desktop was exclusive to the mobile application of Facebook. The company first announced the unique mobile app features at its F8 conference, which was held last year. Meanwhile, it has already been revealed that most of the features of the new layout of the redesigned desktop are quite similar to that of the mobile app redesigned last year. The users will be able to access the major features provided by the social media giant while the app is employing a simple and cleaner design having ample white space.

The newly redesigned layout of the desktop has many innovative features having glossy icons, larger fonts, and also a dark mode. Moreover, the users can look at the required information as the new redesign has a simplified and enhanced layout with much fewer columns. Apart from that, the users can find the Facebook stories moved above the box of Update Status. In contrast, several tabs that were the earlier available left corner of the screen are now available on the redesigned menu bar, which includes marketplace and Events. Among all the new changes, the most significant in the redesign of the desktop consists of the addition of the “Groups” option, which could be found located on the menu bar, which is redesigned. The users can get a lot of personalized feedback and updates from the group they belong to by clicking on the “Groups” option. Also, the input includes the suggestions based on the interests of the particular user.

The users can proceed to try the new design by signing into their account of Facebook and then head towards the menu of Settings. Further, the users will find the option of “See New Facebook” while entering into the Settings, and then they need to click on the provided option. If the users can ready to use the new redesign and wanted to delay it, then that can choose to tap on “Switch to Classic Facebook.”

Amidst all, it seems that Facebook is committed to transforming the social network it owned into a platform of privacy-focused communication. The social media giant has started it by focusing more on the group and events. It is worthy of mentioning that more than 400 million users are active on the platform of social media giant who is quite inactive or don’t check their accounts regularly, whereas 700 million users use the Events of Facebook every month. The new redesign is the step to make these two products more prominent.