Browse Articles  »  Others  »  What is self drilling anchor bolt

What is self drilling anchor bolt

by Anchor S. Web Designer There exist many complex geological conditions in underground engineering, such as weak surrounding rock, fault zone, high stress and large deformation. So it is very difficult to rock bolt construction, especially in cases of collapse serious and needing specialty bolt, most anchor bolts could do nothing.For projects facing such ground conditions, self-drilling anchors should be considered as the main productivity solution. 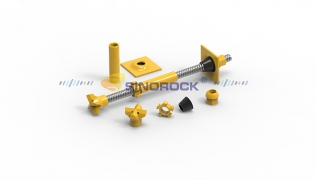 Self drilling anchor bolt combines drilling, grouting and anchoring together, as an efficient anchoring means, self drilling anchor bolt was widely used for drilling, grouting and anchoring in tunnel pre-support, slope anchor, mining, roadbed reinforcement and other projects, and they can work well in narrow space.Self Drilling Anchor Bolt System is a bolting solution for broken rock, loose soil and conditions which are difficult to drill holes, such as fracture zones, decayed rock, gravel, sandy gravel, backfill ground. And It is also used for permanent support for tunneling. In slope stabilization, rock bolts and soil nails can be used to maintain and strengthen soil and rock.Thus, we can know that self drilling anchor bolt has a very wide range of applications.