Browse Articles  »  Technology  »  What is AES Encryption, and How Does it Work?...

What is AES Encryption, and How Does it Work? Definition of Coderstool

In our daily lives, we need to keep our information private and safe from prying eyes. Sensitive information such as passwords to banking applications, messages only meant for the receiver, and transaction histories are only a few.

The need to keep particular information secret is essential for businesses, and the level of importance varies from industry to industry. A restaurant may need to keep its recipe a secret from its competition. Banks must constantly upgrade their security and encryption systems to protect customers’ data from hackers.

Information security is constantly under threat as technology and computation power increases, hence the need to continuously upgrade encryption technology and apply it to protecting vital information.

Before 1997, DES was the strongest and standard encryption technology. However, it became easy to decipher messages encrypted with it. Initially, it took hundreds of hours, but it soon became fifty-plus hours, and by 2021, a message encoded with DES was deciphered in 5 minutes. That necessitated the need for new encryption technology.

The AES, also called the Advanced Encryption Standard, is the current encryption technology used to secure sensitive information and is approved by the National Institute of Standards and Technology.

What is AES Encryption?

AES – Advanced Encryption Standard – is the standard encryption system employed by the United States of America to protect state information. It deploys a symmetric encryption technique (i.e., it uses the same encryption and decryption key) and operates on a block cipher system that hides information using a 4×4 matrix system with varying rounds, depending on the key length used.

Two Belgians developed the AES – Joan Daemen and Vincent Rijmen, and its need arose by 1997 when DES became vulnerable to brute attack. AES is a variant of the Rijndael block cipher. NIST collaborated with businesses and the cryptographic community to create the Advanced Encryption Standard in 1997. The AES is unclassified and available to public and private programs but with restrictions. 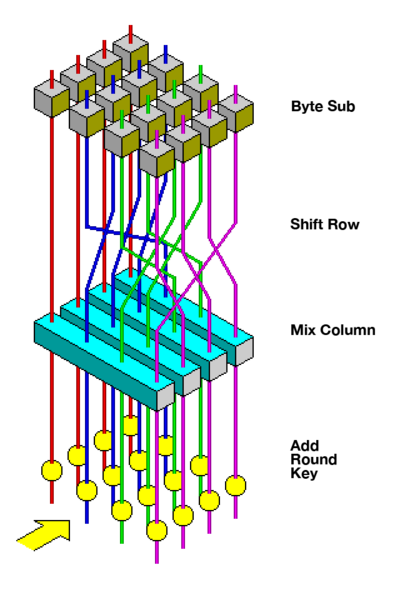 The AES is better than older encryption systems because certain features are resistant to brute attack and take too long for computer power to break its code. Some of the features include:

Substitution-Permutation Network, SPN, is an encryption and decryption method that introduces rounds of keys into the plaintext to transform it into ciphertext. A group operation is vital for applying a round key.

The system needs transformation rounds to create a ciphertext with AES, and the key length determines their length. A different key is used at every round, and each key undergoes the 4×4 matrix, meaning one key pass through 16 states.

The AES algorithm starts with the key expansion stage, where the round keys are generated till it reaches where it adds the round key for use in each state.

Encryption is beneficial not only on the software level anymore. Locks and safes are locked digitally and require high-level security to ensure their content remains secret. AES safely stores web-based (software) information on a physical device (hardware).

The previous encryption algorithms, including DES, are compatible with the software. With the advent of AES, improved security is available for physically valuable items, such as diamonds and cash, especially during transportation.

The ingenuity of the AES is in its simplicity. Using a 16 array design and symmetric block cipher can easily make it pass as an easy-to-break security algorithm. However, using round keys and the substitution-permutation network improves the security of the encryption.

Also, because it is symmetric, a hacker needs to possess the same key used in the encryption of a cipher to get the plain text. Although there is some news in the airwaves about some cryptographers breaking of AES, they have been quickly debunked by other cryptographers.

It takes a fast computer to decipher a ciphertext through substitution and permutation, but AES needs a low RAM to create ciphertext. Deciphering the ciphertext also becomes easy for the recipient as they have the required key and won’t need to rely on computer speed to get the plain text.

This feature makes AES suitable for use in different industries, including homes.

How Does AES Encryption Work?

AES encryption works in the same way as any symmetric encryption algorithm does. However, it uses round keys that depend on each key’s length to create block ciphers.

When a sender inputs plain text, AES creates blocks from the text. Each block usually contains four words, and the algorithm passes all words in the text through the individual steps – key expansion, the sub bytes step, the shift rows step, the mix columns step, and the add round key step.

When the cipher blocks reach the recipient, they decipher the ciphertext because they have the same key used to encode the plaintext, and the process of creating the cipher is reversed to deliver a plaintext. 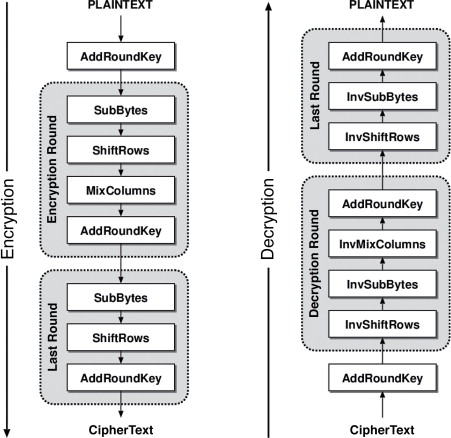 Advanced Encryption Standard is applicable in many institutions that we commonly use. Since security for data and physical items is an integral part of our daily lives, AES is commonly used in:

Every nation’s economy depends on the strength of its economic policies, its application, and the security level of its financial institutions. Banks worldwide, including National and Central Banks, are responsible for keeping their customers’ data private.

Their internet and data security systems are constantly under attack, and they need the most cryptographic-break-resistant algorithm to stand against such attacks. AES provides them with the security system they need to keep the financial records of their customers safe.

Every gadget we own today is internet-enabled, making them prone to attack or spy from hackers. Our smartphones contain our details and sensitive information such as photos, videos, and passwords that can be used for many dubious acts.

Although our phones have some protection, the internet and websites we visit have added protection, thanks to AES. We’re wary of supplying information on insecure websites, and our social messaging apps, such as messenger and WhatsApp, encrypt our correspondence with AES.

Being home to nationally important information, data security agencies are one of the bodies that need the Advanced Encryption Standard more relevant.

They keep sensitive information for governments and individuals that only the owners can read on specific devices.

National security is of utmost importance. Hence the government uses the Advanced Encryption Standard to keep state secrets and information away from the public and prying eyes.

AES was developed when the United States’ national secrets were under threat of exposure. It has, so far, helped to keep them secret.

Why You Need the AES Encryption

When using Data Encryption Standard, DES, it was common to think only government and financial institutions need such a level of data security. However, with the dangers of identity theft made possible through personal data access through hacking, the need for top-level data security has caused individuals and smaller businesses to adopt the Advanced Encryption Standard.

The purpose of AES is to enhance data security. Essential and secret information can be shared between two people without the fear of interception. End-to-end encryption ensures that even when communication is intercepted, only a ciphertext is obtained and won’t be easily broken.

Therefore, you need AES for security and privacy reasons, for yourself and your business.

How to Get AES Encryption

AES Encryption must be costly and difficult to obtain, you may think. However, using an online AES encryption tool can quickly get ciphertext and plaintext.

This process helps you create and read a ciphertext on this encryption tool.

Note that the recipient of your message should use the same secret key and initialization vector as you to get the plaintext.

Data security has become more critical than ever with the ongoing data theft used for criminal acts. You can protect yourself and your business using a readily available AES encryption tool, as this article provides.