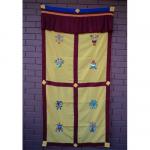 The brief description of astamangal ( The Eight Auspicious Signs) are summerized below:

The white parsal protects us from evil desires. It embodies notions of wealth or royalty, for one had to be rich enough to possess such an item, and further, to have someone carry it. It points to the "royal ease" and power experienced in the Buddhist life of detachment. It also symbolises the wholesome activities to keep beings from harm (sun) like illness, harmful forces, obstacles and so forth, and the enjoyment of the results under its cool shade.

The two fishes symbolizing beings rescued form the ocean of misery of earht existence but came to represent good fortune in general. It also symbolises that living beings who practice the dharma need have no fear to drown in the ocean of suffering, and can freely migrate (chose rebirth) like fish in the water.

The Conch or Sankha:

The white Conch shell or sankha, symbolises the blessedness of turning to the right and proclaim the glory of the saints by its humming sound., which is also used as a horn, symbolises the deep, far reaching and melodious sound of the teachings, which is suitabl.

The function of the curtain and the functional curtain

More number of people with the YiLianYouMeng over, after getting up, first open the curtains, look at the outside world, greet the new day.When the night falls, and need to gently pull the curtain, th...

Discover our many styles of Door curtains and Sidelight curtains! All are high quality and a great value that will last and last. Door window treatments are a lovely...