by Vipphone Z. programmer of iphone 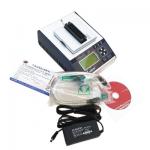 What is the difference between SuperPro 6100 and SuperPro 6100N:
SP6100N is improved version of SP6100 with improved signal quality of IO drivers. Apart from it most hardware and software between these two models remain same.

SuperPro 6100N is a cost-effective, reliable, and high-speed universal chip programmer. It is designed to communicate using USB 2.0 port for development requirement and can also work in standalone mode (without connecting to a PC) for production requirement. It has the largest device support count in the programming industry with 144 pin drivers to support high pin count chips.

Largest Device Support Located in Silicon Valley, we keep good relationships with many major IC companies that are important for us to continuously support new devices. SuperPro 6100 currently supports more than 100,000 devices, which is the largest device library in the programming industry. Requested device algorithms can be added within a week - average lead time from other manufacturers is over two months.

Built-in 144 Pin Driver Most universal IC programmers are designed with 48 pin driver or less. Programmers with a 48 pin d

OBD2Tuning offer universal ultra up818 up828 programmer and variour different kinds of ic chip socket adapters for up818 up828. Do you know the powerful programmer? Here auto diagnostic obd will share...