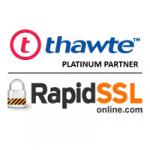 Code signing is a technology which uses digital certificates and the public key infrastructure to sign program files so that users can authoritatively identify the publisher of the file and verify that the file hasnt been tampered with or accidentally modified. As with other PKI technologies, the integrity of the system relies on publishers securing their private keys against outside access.

RapidSSLonline.com is the leading and the foremost SSL certificate provider Platinum Certificate Authority of major SSL brands such as RapidSSL, GeoTrust. Thawte and Symantec on web.

Securing Your Apache Web Server with a Thawte Digital Certificate

By using a Thawte secure sockets layer (SSL) digital certificate, organizations are able to directly implement SSL/TLS properly on the Apache server platform. Many users of encryption fail in one or...