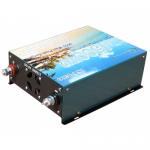 Power inverter is an electronic device that converts electricity from battery to mains i.e DC to AC. It has proved itself as one of the best alternatives to provide uninterrupted power supply. Power...