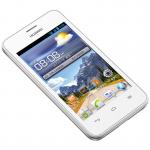 Embark on a journey to the world of unlimited possibilities with Huawei Ascend Y320, a power packed performer set to enrich your smartphone experience. Embedded with a whopping 10.2 CM (4) display, Y320 guarantees that you enjoy your multi-media on a big screen. This smartphone boasts of 1.3 GHz Dual Core processor coupled with the latest Android 4.2 operating system, keeping you always close to your fun world. The impressive design will certainly make Ascend Y320, a delightfully wonderful choice for the ever challenging GenX. Upgrade from your feature phone & experience modernism with amazingly suave Huawei Ascend Y320 smartphone. Lets explore further as to what makes Huawei Ascend Y320, a smartphone with Unlimited Possibilities - See more at: http://www.huaweidevice.co.in/huawei-ascend-Y320

With a minimalist design that's only 11.1 mm thin, the Y320 is comfortable to hold and easy to use. Its understated style is packed with cutting edge features that...