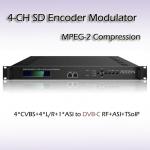 REM7204 MPEG-2 SD CVBS to RF Four-Channel Encoder Modulator offers a professional and high-integration modulator, together with encoding module. The device is able to accept 4-channel of CVBS signals, and compresses signals in MPEG-2 SD standard. Additional TS from ASI and Tuner(DVB-S/S2 or DTMB) ports is able to be mixed and multiplexed with the input channel(s). The device then modulates signals in DVB-C, DVB-T/T2, ATSC-T, or ISDB-T/Tb mode in excellent index. REM7204 is able to be flexibly taken as an independent encoder, or modulator, too, as per its design of modularization. Due to its professional and full functions, REM7204 has been widely applied to IPTV system, digital TV broadcasting & distribution systems, home entertainment, advertisement broadcasting, etc., in shopping mall, hospital and school, hotel and restaurant, museum, theater, cinema, community, airport, railway station, public square, club, and so on.