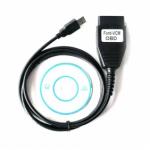 Ford VCM OBD is diagnostic software for Ford vehicles.It is designed for ford,mazda,and other few brand cars,really working very well with those cars 1996-2010,some 2011 cars.

1.Support for wide range of ECUs and models

Ford VCM OBD is able to connect to control units on all Ford vehicles 1996-2010. ECU identification, fault code memory reading and clearing works on all control units. Live data is available on all important ECUs in models such as Mondeo, Focus, Fiesta and other. Actuator tests and coding is available for most demanded control units.