Why Carbon Dioxide (CO2) is Not the Cause of Global Warming? - Part 2

The amount of energy given off by the surface of the earth is claimed to be 79% radiation and 21% conduction and vaporization. White hot metals could not emit 79% radiation under atmospheric conditions. The real proportion would be 1-3% radiation. Reducing the radiation by a factor of 40 would reduce the calculated global warming by a factor of 40.

The air has too little heat capacity to warm ocean water or melt Arctic ice. Twelve-year-olds were supposed to learn what heat capacity is, but physicists didn't.

To heat oceans with air requires a ratio of 3483 by volume for same temperatures. The heat capacity for air is 1.2 kj/m³/°C, while for water it is 4180 kj/m³/°C. To heat the oceans 0.2°C to a depth of 350 meters would require air losing 0.2°C to a height of 1,219 kilometers (at constant surface pressure). That's 100 atmospheres. The oceans cannot be heated by the atmosphere.

Melting ice with air is even more absurd, as an additional "heat of fusion" is required, which is 334 kj/kg, which is an additional 278,000 m³ of air per °C per m³ of ice. In other words, air in contact with ice sucks the heat out of the air with no effect upon the ice. With a small amount of ice and a lot of air, the cool air gets replace with warm air, but on a global scale, the replacing does not occur. It means ice melting has nothing to do with global warming.

6. Starting at the End-Point

For a mechanism, climatologists used radiative transfer equations to supposedly show 3.7 watts per square meter less radiation leaving the planet than entering from the sun due to carbon dioxide. There can never be a difference between energy inflow and outflow beyond minor transitions because of equilibrium, as climatologists recognize. Yet they claim the 3.7 w/m² is a permanent representation of global warming upon doubling CO2. This number is supposed to result in 1°C near-surface temperature increase as the primary effect by CO2. However, watts per square meter are units of rate, while rates produce continuous change, not a fixed 1°C. The 1°C was supposedly produced by reversing the Stefan-Boltzmann constant, but reversing it is not valid. (Secondary effects supposedly triple the 1°C to 3°C.)

It means climatologists started at the desired end point of 1°C and applied the Stefan-Boltzmann constant in the forward direction to the get the 3.7 w/m² attributed to radiative transfer equations. Radiative transfer equations cannot produce any such number, because radiation leaves from all points in the atmosphere with 15-30% going around greenhouse gases. That dynamic, combined with equilibrium, is beyond scientific quantitation. 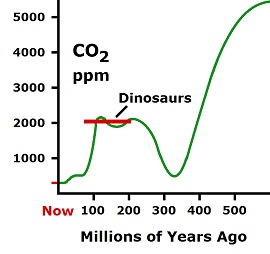 All life is on the verge of becoming extinct due to a shortage of carbon dioxide in the air, which is needed for photosynthesis. The oceans nearly absorbed all carbon dioxide from the air 300 million years ago. In the nick of time, volcanoes replaced some of it, but they died down, and now the CO2 is almost gone again. carb.html

•  The planet is cooled by radiation which goes around greenhouse gases, not through them.

•  Temperature effects are not additive; they are in dynamic equilibrium.

•  The climate is too random and complex for scientific measurement of the claims being made.

•  Temperatures cannot be calculated, they can only be measured, which eliminates all claims of global warming science.

•  Real scientists determined a century ago, and ever since, that saturation precludes global warming by greenhouse gases. Alarmist scientists reduced saturation to irrelevance and contrived a result without it. 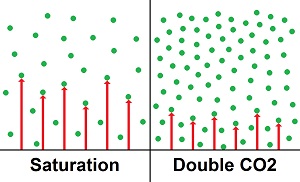 •  Global warming rests on fake calculations with radiative transfer equations to get around saturation. Saturation cannot be erased, as it is easily measured and precludes the whole subject of greenhouse gases creating global warming.

•  Calculations produce a fudge factor as the primary effect by CO2, and it is said to represent an unquestionable law of physics, even though the world's largest computers were needed to derive it, since it involved all of the complexities of radiation in the atmosphere, and then required additional modeling to account for clouds absorbing radiation. 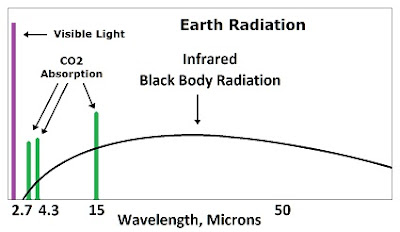 Methane is not a Stronger Greenhouse Gas. It absorbs in a shorter distance, which does nothing to increase heat.

What is being called stronger is absorption of radiation in a shorter distance.

There was an effect between 1980 and 1998, but it was oceans warming, not the atmosphere. Warm oceans increased precipitation. Now, oceans are cooling back down, and droughts are the result.

The claim of 97% of scientists agreeing is total fraud, mainly because any scientist who disagrees is not allowed to get grants or publish. (See How the Firing Works) It shows the coercion and intimidation in science. Then the supposed determination of 97% was totally subjective, as no scientists make such a claim.

Warming around the Arctic is cyclic due to warm ocean currents flowing over the Arctic. It lasted for 20 years, and now the Arctic is freezing back up.

"Delicate balance" is total stupidity. There is an immense shortage of CO2 in the air for plant growth. Photosynthesis evolved on 20 times as much CO2. Who could survive on one twentieth the nutrients they evolved on.

Volcanoes put 2.3% as much CO2 into the air as humans every year (gov source). If CO2 could accumulate, the volcanic amount in 43 years would equal the human amount for one year. Volcanoes have been doing it for 5 billion years, and humans for only 150 years. The supposed total amount of human accumulation (240 GT) is put into the atmosphere by volcanoes every 1,200 years. See Delicate Balance Fraud

Where does the volcanic CO2 go, if the human amount accumulates? If it is acidifying the oceans, why didn't volcanoes acidify the oceans many times over? See Acid in the Ocean Fraud

"Total human CO2 emissions primarily from use of coal, oil, and natural gas and the production of cement are currently about 5.5 GT C per year (giga tons of carbon per year). A recent update says 8.6 GT.

Notice that the oceans exchange ten times as much carbon with the atmosphere as humans produce (90GT vs. 8.6 GT). Exchange means regulation. And humans only add 1% as much CO2 to the atmosphere per year as already in it. If such a miniscule amount were as critical as propagandists claim, all life would have been destroyed long ago. Nature hasn't been sitting on a 1% knife edge for millions of years.