When was mid-day meal started by Akshaya Patra?

One firm vision - ‘No child in India shall be deprived of education because of hunger’… just 1 kitchen to cook meals for 1,500 children… began the journey called Akshaya Patra!

The Akshaya Patra Foundation is a non-profit organisation in India. In partnership with the Ministry of Human Resource Development, Government of India, and various State Governments, Akshaya Patra implements the Mid-Day Meal Scheme across the country. It was established in 2000 and is headquartered in Bengaluru, Karnataka. 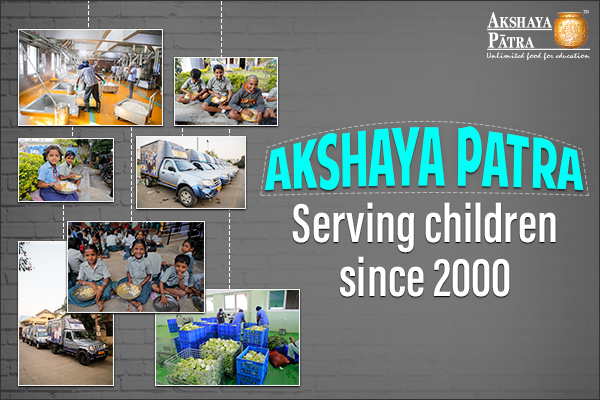 Once the idea of providing school lunch was conceptualised, Venu Vadana Gopal Dasa conducted a detailed research to choose the schools in need of the meals. Reminiscing the past, he says, “I went to explore the surrounding areas in Bengaluru and found that the schools in the outskirts and rural areas were in maximum need of a school Mid-Day Meal Programme. I visited Government schools in areas like Peenya, Chikkabidarakalu and Makali and was moved by the plight of the kids there. We then approached these schools and served the first meals on 3 June 2000 to a total of 1,500 children in five Government schools.”

Over a period, the impact of this initiative was witnessed in the form of increased enrolment, regularity in attendance, improved health, and better concentration during class hours. The overwhelming response from the schools brought to fore the need for the Mid-Day Meal Programme, leading Akshaya Patra to expand its service to more schools.

The initial journey for this non-profit organisation in India wasn’t a smooth sail. The main concern was lack of food packing vessels and vehicles to transport the cooked meals. Philanthropists Mr Mohandas Pai stepped in by donating the first vehicle to transport food to the schools and Mr Abhay Jain promised to get more support in the form of donors to contribute for the programme.

As Akshaya Patra was already providing food for education through its school meal programme, it was called to give testimony for verifying the efficacy of providing cooked meals to schools. Following this, the Supreme Court of India passed a mandate on 28 November 2001 stating “We direct the State Governments/Union Territories to implement the Mid-Day Meal Scheme by providing every child in every Government and Government assisted Primary School with a prepared mid-day meal.” This was a welcome progression for Akshaya Patra and the Foundation partnered with the Central Government and various State Governments to implement the Mid-Day Meal Scheme in a public-private partnership model.

A journey that began by nourishing 1,500 children in one location has today grown to becoming a movement with 17,65,597 children in 45 locations across 12 states in India. The partnership with the Government under the Mid-Day Meal Scheme and constant support from well-wishers and donors helped Akshaya Patra to expand the food for education programme during the course of 18 years. It also aided the non-profit organisation in India to initiate several child-centric programmes such as Anganwadi feeding, scholarship, talent development, along with supporting the Foundation’s disaster relief feeding service.

With the mission to nourish 50 lakh children in India by 2025, Akshaya Patra is moving forward strategically and sustainably. The Foundation is certain that with concerted effort from the Government, the policy-makers, corporates and businesses, and the civil society, we will be able to create generations of healthy, educated, and resourceful citizens; empowering them to take on the mission called Prosperous India.