by Rudy P. SysAdmin at howtofindthemoney
Energy, particularly electrical power, is one of the most critical components of any modern industrial economy with most economies being based on low-cost abundant energy supplies. In this regard, coal continues to be the primary energy source of choice for electrical power generation. Coal can be stored easily and converted into electrical power on demand regardless of season or local weather conditions. However, conventional coal-fired power generation can result in high emissions of CO2 and other pollutants. These can be captured or neutralized; however, in some cases this can greatly increase cost. 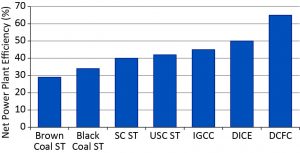 FIGURE 1. Average efficiency of coal-based power generation technologies
Notes: Brown Coal ST = brown coal steam turbine; Black Coal ST = black coal steam turbine; SC ST = supercritical steam turbine; USC ST = ultra-supercritical steam turbine; IGCC = integrated gasification and combined cycle (gas turbine); DICE = direct injection coal engine; DCFC = direct carbon fuel cell
New coal-based power generation technologies currently being demonstrated and deployed, such as oxy-combustion, supercritical or ultra-supercritical coal-fired power plants, various gasification technologies, and direct injection coal engines, can lead to incremental or dramatic reductions in emissions. Such technologies are critical as the world progresses to low-emission power generation. However, further improvements to conversion efficiency and emission reductions remain highly desirable. Direct carbon fuel cells (DCFCs) are an emerging technology that has the potential to almost double electric efficiency (i.e., to 65–70%) and halve greenhouse emissions compared with conventional coal-based power plants. Rather than burning coal, these fuel cells electrochemically oxidize it; thus their efficiency is not Carnot cycle limited. (See Figure 1 for a comparison of the efficiency of different coal-to-electricity options.) Furthermore, DCFCs produce two separate exhaust streams, one that is essentially oxygen-depleted air and the second being a concentrated stream of CO2. Thus the energy penalty for CO2 capture is significantly lower (almost zero) compared to post-combustion capture. DCFCs are at an early stage of development, but a number of groups have recently become involved in the development of this tech-nology leading to a range of novel systems and concepts being investigated. In this article we provide a broad overview of the technology. More comprehensive technical information on various systems can be accessed in References 1–3.
WHY FUEL CELLS ARE MORE EFFICIENT THAN COMBUSTION?
Fuel cells convert fuels to electricity via electrochemical oxidation of fuel, rather than via combustion, to generate heat and pressure that is then converted into electricity through a heat engine, such as a steam or gas turbine. In conventional fuel cells, gaseous (CO, H2, CH4) or liquid (methanol, ethanol) fuels are converted into electrical power. DCFCs operate via the same broad principle; however, the solid high-carbon fuel (such as coal) is consumed to produce electrical power through reactions (1) and (2), respectively occurring at the cathode and anode electrodes of the cell. The two electrodes are kept separated by an oxygen ion-conducting ceramic membrane (four types of direct carbon fuel cells are shown in Figure 2).
Cathode: O2 + 4e– → 2O2-              (1)
Anode: C + 2O2- → CO2+ 4e–          (2)
The fuel is housed on the anode side of the membrane with air being used as the oxidant on the cathode side. The oxygen molecules become ionized [reaction (1)], and the oxygen ions flow across the membrane and react with the fuel to produce CO2 [reaction (2)]. The electrons released via this process move through an external load generating an electrical current. Fuel cells operate similarly to a battery; however, unlike a battery, the fuel cell is continuously “charged” as the fuel is replaced at the anode as it is consumed.

FIGURE 2. Pictorial representation of different DCFC designs under consideration globally
Electrochemical oxidation of fuels to produce electricity is highly efficient because fuel cells contain few moving parts and do not rely on pressure or temperature gradients to operate (again, not Carnot cycle limited). The efficiency of a fuel cell system is defined by four factors: system losses, fuel utilization, electrochemical losses, and the thermodynamic (theoretical) efficiency of the system. The system losses are typically a minor component (approximately 10%) and are largely similar for most high-temperature fuel cells. Solid fuels (such as coal) can be easily separated from the gaseous products (i.e., CO2 in the exhaust) leading to nearly 100% fuel utilization compared to 80–95% for conventional gaseous fuel cells. Electrochemical losses are caused by slow reaction kinetics at the electrode/electrolyte interface and transport of ions through electrodes and the electrolyte. These losses are significantly reduced by operating at high temperature but are still greater for carbon than for conventional gaseous fuels. The thermodynamic efficiency of a DCFC is largely independent of temperature, and theoretically 100% of the chemical energy in the fuel is available for conversion to electricity. Taking the typical losses into account, practical efficiencies for coal to electricity of around 65–70% are considered attainable with the remainder of the energy being lost as waste heat.1 If the waste heat can be utilized (for instance, for coal drying or pyrolysis) then overall efficiencies in the region of 80–90% could be achieved. This is higher than attainable with a gaseous fuel; for comparison, leading MW-scale molten carbonate (FuelCell Energy) and solid oxide fuel cells (SOFC) (Bloom Energy), operating on natural gas, have an electrical efficiency of around 47% and 52%, respectively.
FUEL CELL DESIGNS: KEY CHALLENGES AND TECHNICAL MERITS
DCFC technology is at an early stage of development, with many organizations focusing on the fundamental aspects of the technology.1,3 In general, the key challenge is to strike a balance between cost, performance, and lifetime.
At the core of each proposed fuel cell system is the cell design, which determines all other features. The four most commonly suggested fuel cell designs that can use solid fuels are shown in Figure 2 and compared in Table 1. 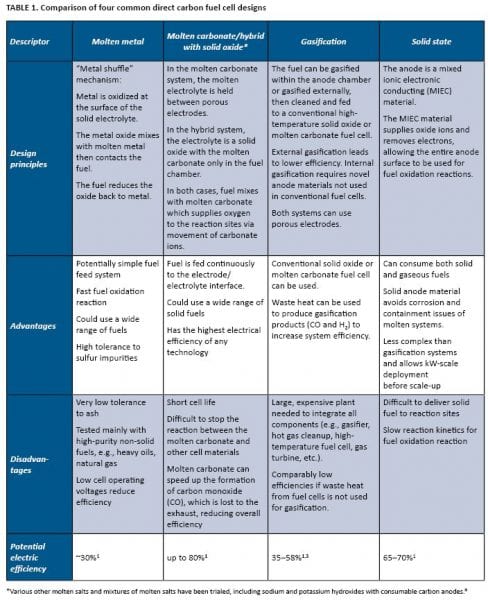 The main difference between each of these systems, and compared with other conventional fuel cells, is the fuel electrode (anode) and the fuel delivery system. Modifying the fuel electrode allows a greater area for the reactions to occur between the solid fuel and the electrode/electrolyte interface. Having a larger reaction area means that more electrons can be produced, and therefore more electrical power can be generated. Conventional fuel cells have porous electrodes, which allow gas to penetrate and react over a large area. As this is not possible with a solid fuel, alternative fuel electrode designs are needed to increase the area available for reaction.
FUEL REQUIREMENTS
The fuel requirements are yet to be fully determined, with only limited studies investigating the effect of impurities and fuel composition on the overall fuel cell performance. There are no defined specifications for an ideal fuel; however, fuel properties which could potentially improve the performance of the fuel cell include high electrical conductivity, low crystallinity, small particle size, friable particles, high surface area, and low ash. DCFCs are less sensitive to other fuel properties that are critical for combustion, such as moisture and thermal content.2
In terms of reactivity with fuel impurities, systems with molten components generally will have significantly more stringent fuel requirements as even small levels (less than 1%) of ash will accumulate within the anode chamber and react with the molten metal or carbonate components, leading to solidification of some components and rapid degradation in cell performance.

If gasification is to be used in conjunction with conventional fuel cells, then ash can be removed during gasification; however, gas cleanup to remove particulates, sulfur, mercury, and phosphorous-based impurities would still be required. If these impurities can be reduced or eliminated via coal cleaning or careful selection of fuel, then it is likely to significantly reduce the overall capital cost of the final gasification DCFC installation.
The direct contact solid state designs fall in-between the external gasification fuel cell systems and systems with molten components and are more resilient to impurities than conventional SOFCs or fuel cells containing molten components. This is because the MIEC anodes are typically a solid ceramic material, which is far more resistant to chemical attack or poisoning and thus will tolerate a greater level of impurities and ash than molten systems. High levels of ash will still be detrimental to the performance of the fuel cell and will be more difficult to remove from a fuel cell system than a gasifier. Thus ash content of the fuel may need to be reduced by fuel pre-processing prior to its use in a direct-contact solid-state fuel cell. Although high ash contents are generally considered detrimental, not all ash constituents have a negative impact on cell performance: Some impurities contribute to improvement in cell performance. This was well demonstrated by Rady et al., who showed that the presence of brown coal ash led to a 25% increase in power output of the fuel cell.
FUEL CELL POWER PLANTS
One key advantage of high-temperature fuel cells is the greater availability of the waste heat from the system. This, combined with  the low-pressure operation and the modular nature of fuel cells, allows far greater flexibility in design of fuel cell plants and leads to greater integration possibilities. Figure 3 provides a schematic overview of an envisaged DCFC power generation module operated on coal. Depending on the technology chosen, 10–30% of the fuels’ energy may be available as high-grade heat (600–800oC) that could be used for fuel drying or pyrolysis, used within a low-pressure steam turbine, or used for the production of syngas. In this way the DCFC can be seen both as a coal-based power production technology and as a key enabler for the production of high-value-added products for export from abundant low-grade fuels, such as Victorian brown coal. Furthermore, since the waste stream from a DCFC is pure CO2, this whole process could conceivably have a very small carbon footprint if CCS is employed. Further reductions in CO2 emission could be realized if waste biomass sources are mixed with conventional fossil fuel carbon sources. 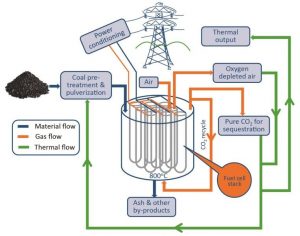 FIGURE 3. A schematic of an envisaged DCFC power generation module operated on coal
CURRENT STATUS AND FUTURE PROSPECTS FOR COAL-FUELED DCFCS
In general, grid-connected fuel cells are becoming a reality—with a number of commercial systems now available in several markets ranging in size from a few hundred watts to larger scale units in the MW range. All of these systems operate on gaseous fuels. These fuel cell systems offer some benefits in terms of emissions, efficiency, and flexibility of scale, but are essentially an incremental step when compared to advanced combined-cycle gas turbines. DCFCs are, by comparison, in their infancy, but offer a step increase in efficiency over traditional and emerging solid fuel combustion technologies with the added advantages of low greenhouse gas emissions and the low cost and energy requirements for CCS. This implies the fate of DCFCs is largely dependent on developments in the global energy market. If there is a drive to maintain and grow power production from solid fuels, particularly low-grade solid fuels, DCFC is likely to become a very attractive future technology that could offer a 10–50% increase in efficiency over conventional power generation technologies, that is compatible with carbon capture and storage, and that is adaptable in terms of scale of deployment.
ACKNOWLEDGMENTS
The authors acknowledge the support of Brown Coal Innovation Australia (BCIA) for this work and Dr. Aniruddha Kulkarni for the internal review of this document prior to publication.
The 10 largest coal producers and exporters in Indonesia:
Click Here! Top Clean Coal Contractors for Power Plant, Gasification, Liquefaction and Emission Control System
Source: Advance Science News