The reasons of blockage faults in 200kw Perkins Diesel Generator

When the air bubbles from the oil outlet valve, it is judged that there is the air blockage fault in the engine fuel supply system, the starter can be continued to hit until the air in the pipeline is exhausted, indicating that the pipeline is not damaged and the engine can work normally.

If during hitting the starter, there is always air exhausted, indicating that there is a leak in the oil supply pipeline. The method of eliminating air blockage is to find the leak site, seal well to eliminate the leak, and then eliminate the air in the system. If the air in the oil supply pipeline is blocked by evaporation of fuel molecule into fuel vapor due to very hot weather and low air pressure, this is a special case. People call it high temperature air blockage, this is another case. 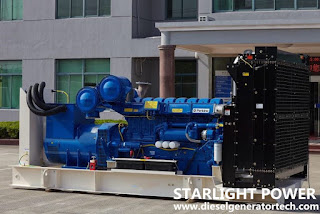 If the resistance is greater when pushing the hand oil pump, can focus on checking the oil supply pipeline from the hand oil pump to the high-pressure pump. The blockage may occur in the fine fuel filter.

The way to check whether the centrifugal oil filter is working properly is to monitor the "buzz" of the diesel engine when its rotor continues to rotate just after shutdown. If the sound is working normally for a long time, if the sound of rotation is not heard, indicating that the fault occurs.

When check ice blockage fault, it must be in Winter, maybe there is water in diesel oil. Common ice blockage fault part is in pipelines and fittings, the situation is more complex, warm pipeline, melting and freezing, if the pipeline is naturally open, it is not necessary to find the exact location of the ice blockage. After removing the foreign matter blockage, the fuel supply system should also be thoroughly cleaned, even the fuel tank should be cleaned. In order to prevent material resistance, attention should be paid to long-term injection of clean fuel oil in fuel tank.

Water blockage means that there is water in fuel supply system and fuel tank. If can sure water blockage fault, should release water and oil which in bottom, and the engine should be started continuously by the starter to see if the water blockage fault can be eliminated. If it can not be removed, all remaining fuel should be discharged, and the fuel tank and fuel supply system should be thoroughly cleaned, and the fuel filter (core) should be replaced. After that, should pay attention to the addition of clean and anhydrous fuel and the possibility of water entering the fuel system should be excluded. The performance of water blockage is complex, which should be distinguished from the difficult faults of diesel engines such as leakage of combustion chamber. For example, the damage of the cylinder gasket leaks into the combustion chamber, and the moisture is discharged from the exhaust pipe. The diesel engine also works unsteadily.

According to the degree of water leakage and the number of cylinders, the amount of drainage is different, and the working condition of diesel engine is also different. Therefore, it is necessary to apply experience and judge comprehensively according to many factors, such as engine operating time, common working conditions, medium consumption and so on.

Hope the article can help you to solve the leakage faults in Perkins diesel generator set. If you are interested in diesel generator set, welcome to contact us by email sales@dieselgeneratortech.com, we will guide you to select the most suitable product.