Browse Articles  »  Business  »  The Green Hydrogen is Too Small for European...

The Green Hydrogen is Too Small for European Hydrogen Economy

by Rudy P. SysAdmin at howtofindthemoney
After decades of stagnation and multiple false dawns, the hydrogen economy is finally taking off, with some experts predicting that hydrogen could become a globally-traded energy source, just like oil and gas. A growing number of countries and industries are proactively investing in hydrogen technologies; none, however, can rival the EU's zeal.
The European Union has set out its new hydrogen strategy as part of its goal to achieve carbon neutrality for all its industries by 2050.
In a big win for the hydrogen sector, the EU has outlined an extremely ambitious target to build out at least 40 gigawatts of electrolyzers within its borders by 2030, or 160x the current global capacity of 250MW. The EU also plans to support the development of another 40 gigawatts of green hydrogen in nearby countries that can export to the region by the same date.
The EU aims to have at least 6 gigawatts of clean hydrogen electrolyzers installed by 2024.
Good news for natural gas companies: Although Brussels clearly favors "green" hydrogen produced by renewable energy, it has signaled that it will also encourage the development of "blue" hydrogen that is produced from natural gas paired with carbon capture and storage (CCS).
Green vs. Blue Hydrogen
The EU has said that hydrogen will play a key role in helping decarbonize manufacturing industries and the transport sector. The organization says it will support blue hydrogen during a "transition phase," although it has not mentioned it in its topline targets.
Although natural gas producers would no doubt prefer centralized blue hydrogen, they will not be complaining too much since natural gas infrastructure can easily be repurposed to carry hydrogen. 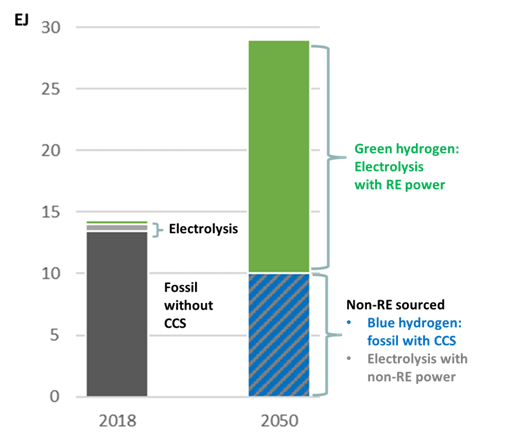 The latest decision by European policymakers follows years of hard lobbying by more than 30 energy companies including ExxonMobil, ENI, Shell, Total, Equinor, and other European natural gas companies which have called for a "technology-neutral strategy," arguing that renewables such as wind and solar cannot grow fast enough to power the "clean hydrogen" sector to meet decarbonization goals. The signatories have claimed the green hydrogen industry is currently too small to spark the growth of a large-scale European hydrogen economy in the space of just a decade.
Although a colorless gas, hydrogen gets referred to in colorful terms including blue, brown, green, and grey depending on how it's produced. The nomenclature used by market research firm Wood Mackenzie classifies it as brown when it's produced via gasification of coal or lignite or grey when it's made through steam methane reformation, typically using natural gas as the feedstock. These two are currently the leading methods of producing industrial hydrogen. Both processes generate varying amounts of C02 though they are still considerably cleaner than burning fossil fuels.
Green hydrogen projects
Last week, U.S. industrial chemicals giant Air Products announced that it would build a giant hydrogen project in Saudi Arabia using 4GW of renewable power, making it the world's largest green hydrogen project. The plant will produce 650 tons of green hydrogen daily, enough to run ~20,000 hydrogen-fueled buses. The $5 billion plant will be jointly owned by Air Products and Saudi Arabia's ACWA Power and Neom.
Last month, Germany committed to invest €9B (about $10.2B) in hydrogen technology with electrolysis capacity of 1GW over the next two decades. Germany--which currently consumes 55 TWh of CO2-intensive hydrogen in its steel, chemical and fertilizer industries, each year-- wants to gradually get rid of grey fossil hydrogen generated from natural gas and instead scale green hydrogen produced from wind and solar energy.
Other countries with big hydrogen commitments include Australia, China, France, Norway, South Korea, and the UK, among others.
The 10 largest coal producers and exporters in Indonesia:
Click Here! Top Clean Coal Contractors for Power Plant, Gasification, Liquefaction and Emission Control System
Source: Daily Sports Car