Since Magreth had experienced a healthy pregnancy, she and her husband Agustino were expecting a healthy baby girl. 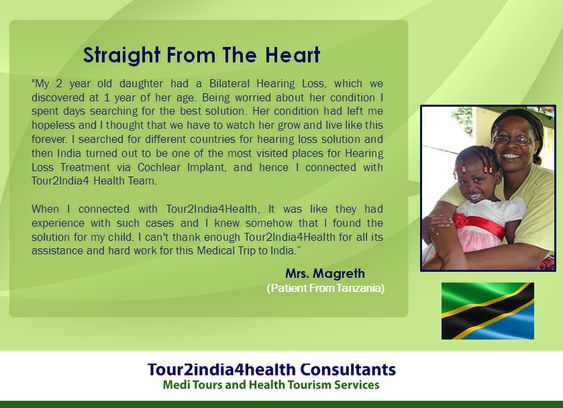 “Out she popped, and everything was perfect,” Magreth recalls. “When she failed her newborn screening test, we weren’t that concerned. We knew that babies could fail that test for a number of reasons, even if they have no hearing problems.” Two weeks later during a visit with her pediatrician, more testing provided a diagnosis: Sekelaga had severe to profound bilateral hearing loss. “When I realized my daughter couldn’t even hear me tell her that I love her, I was a mess,” Magreth recalls. “It felt like the world was falling apart at that moment.”

Sekelaga tried hearing aids, and although she was finally able to hear her parents say her name, the hearing aids were not enough to compensate for her hearing loss. Since Magreth is a special education teacher, she was already familiar with cochlear implants—surgically implanted devices that offer the hope of gaining the ability to sense sound. “Deciding to pursue cochlear implants was a pretty easy decision,” says Agustino. “We didn’t really give it a second thought. As a parent, you just want to give your kid every opportunity possible—especially the chance to hear.”

After multiple visits to doctors in Tanzania, they finally reached an audiologist who explained how cochlear implants could give Sekelaga hearing, allowing her to develop her vital language skills.  Hearing of this great news, Sekelaga’ father Agustino began researching for treatment options. “We did our research and knew we couldn’t delay her treatment any further”, he said. Their research pointed them towards India: “We read about so many cases of patients in India receiving cochlear implants successfully. India has the latest technology for ENT specialization; we decided to give it a shot.” After looking at the options of the best hospital for low-cost cochlear implant surgery in India, the family decided to visit in India.

Over the years, India has been at the forefront of developing technologically advanced solutions that offer superior hearing performance. In an endeavor to create cutting-edge hearing solutions, ENT specializations around the country have helped bring the gift of sound to more than a quarter of a million people in India and across the world. Their search for treatment in India led them to where they came in contact with a case manager of the company who made the entire process of traveling to India a lot simpler. “Our case manager explained the entire process and also told us to send all the medical examinations carried out in Tanzania.”

Our appointment was already fixed before they arrived the day after, so the family got a day’s rest before the appointment. “Best cochlear implant surgeon India associated with Tour2india4health spoke to us kindly and made us feel that no matter what, everything would be OK. We had to do an auditory brainstem response (ABR) test and a CT scan to verify the amount of hearing loss and check Sekelaga’s anatomy if we decided to give him cochlear implants. The ABR revealed him to be profoundly deaf in both ears, but her anatomy was ideal for the implant surgery, recalls Agustino, the doctor confirmed that my daughter would indeed need a bilateral cochlear implant. “

“When I first met the surgeon, I felt like I had known him forever,” Magreth says. “He answered every single question we had and was honest with us throughout the process.” A few days later, the family met the best cochlear implant surgeon India, to discuss their implant choices. The very next day Sekelaga received her cochlear implant surgery. It was about a six-hour surgery and Sekelaga had to spend the night at the hospital.

As soon as the cochlear implants were activated, Sekelaga’s face lit up and she pointed to her ears. Her parents let out a sigh of relief. When they took her home, they found the most joy in the small, mundane sounds around their house. Gracie could finally hear the front door open, the dog bark, and most importantly—her parents say I love you. “Thanks to tour2india4health consultants team they were with us throughout our a journey of cochlear implant surgery in India”