Browse Articles  »  Technology  »  SunGas Partnership With Hatch to Accelerate the...

by Rudy P. SysAdmin at howtofindthemoney
SunGas Renewables Inc., a supplier of proven biomass gasification systems, announced a strategic alliance with Hatch, Ltd., a global advisory, development consulting, multidisciplinary engineering and project delivery firm. The alliance will leverage both organizations’ technical expertise, engineering capabilities and market knowledge to accelerate the deployment of SunGas’ biomass gasification systems.
SunGas gasification systems are based on pressurized fluidized bed technology originally developed by the Gas Technology Institute (GTI), which has been deployed commercially around the globe. The technology platform generates syngas from woody biomass, the critical first step in the large-scale production of renewable, low-carbon fuels and chemicals.
The GTI gasification process is based on a single-stage fluidized bed for production of low-to-medium heating value syngasfrom a variety of feedstocks. Two versions of the process were developed more or less in parallel, with the U-GAS technology developed for gasification of all ranks of coal and the RENUGAS technology for gasification of highly reactive fuels such as peat, biomass, pulp mill residues and wastes. Through this development process it was determined that a single gasifier design could be used for all of these fuels, including mixtures such as biomass and coal. 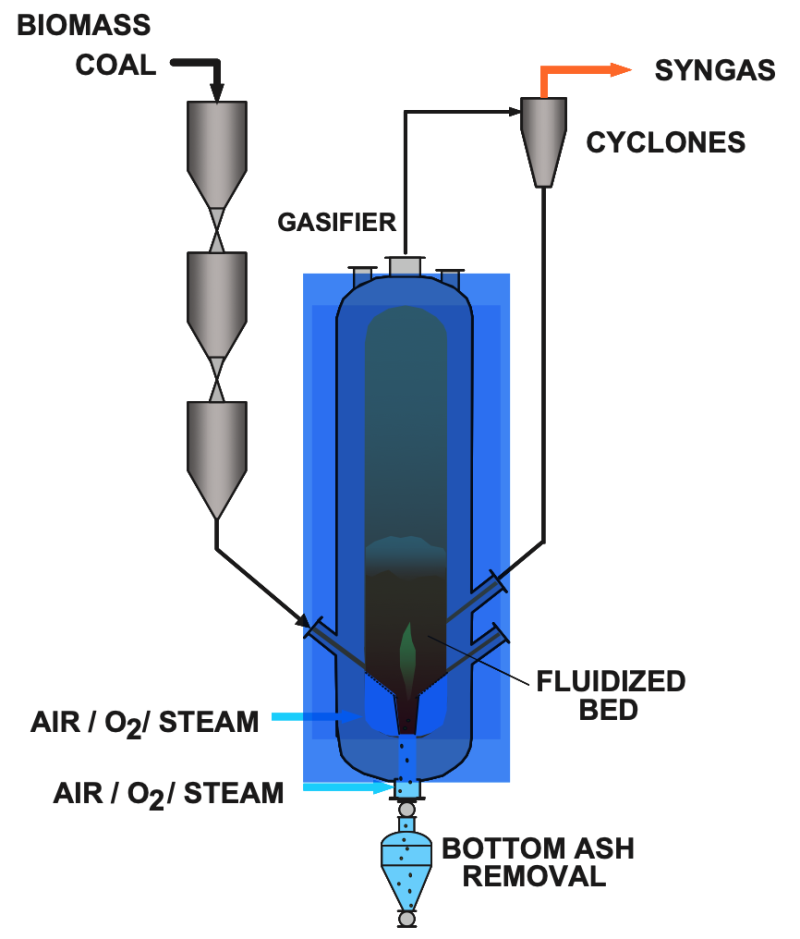 GTI gasification technology
In the GTI gasification process, fuel is dried to the extent required for handling purposes and conveyed into the gasifier from a lock hopper system. Within the fluidized bed, the fuel reacts with steam and air or oxygen at a temperature of 840 °C to 1100 °C (1550 °F to 2000 °F).
The temperature for gasification depends on the type of fuel used and is controlled to maintain high carbon conversion and non-slagging conditions for the ash.
The GTI process accomplishes four important functions in a single-stage fluidized bed gasifier. It decakes, devolatilizes, and gasifies fuel, and if necessary, agglomerates and separates ash from the reacting char. The operating pressure of the gasifier depends on the end use for the syngas and may vary from 3 to 30 bar (40 to 435 psia) or more. After cleaning, the product gas can be used as industrial fuel gas for process heating, synthesis gas for production of ammonia, hydrogen or liquids, and for power generation via IGCC or fuel cells.
Hatch brings engineering competence and project execution horsepower to the alliance, supporting SunGas in providing customers with superior value, predictable delivery, and critical support throughout their project lifecycles.
The 10 largest coal producers and exporters in Indonesia:
Click Here! Top Clean Coal Contractors for Power Plant, Gasification, Liquefaction and Emission Control System
Source: Green Car Congress