There are various ways to bend sheet metal. However, the most common and versatile method for making three-dimensional products from metal sheet is using hydraulic vertical bending press brakes like at https://www.harsle.com/press-brake.html 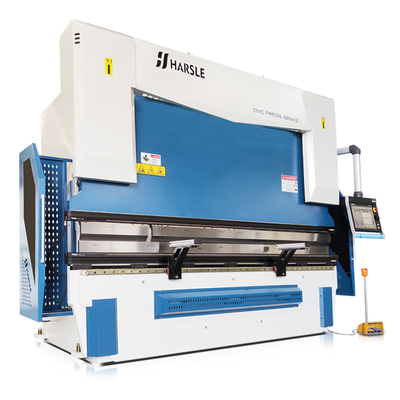 The main tasks that must be solved in the bending process are to achieve maximum accuracy of the radius and angle at the bending point and to maintain the exact size of the part shelves within the specified tolerances. The part is installed on the die and positioned against the stops in a horizontal position.

The required bending angle is achieved due to the penetration depth of the punch into the matrix, pressing the workpiece into it. The radius in this case depends on the distance between the edges of the matrix (when it is opened) and the radius of the punch.

As a rule, several bending methods are used to achieve the desired radius and angle. Each of them has both advantages and some disadvantages. At the same time, for all methods, it is very important to select the most suitable tools. The possibility of obtaining the required radii and angles largely depends on the size and shape of the "punch-matrix" adjustment. Let us dwell in detail on the key points of only the two most common methods - adaptive (metal bending at three points) and bending in the air. But before describing, let's consider the design and principle of operation of modern press brakes.

The main structural elements of a press brake are:

The hydraulic cylinder rods give the upper beam a vertical movement; this achieves the required depth of penetration into the punch matrix. The back stops move freely in depth, along the bend line, and in height relative to the bend line.

The plate bending machine can be equipped with a front plate support device, which provides for the function of its support during the bending process.

Press brakes are classified into three categories depending on the way they control the positions and movement of the axes:

By purchasing a hydraulic listogib of the first two categories, the company makes a choice in favor of fairly budgetary solutions to its tasks. When buying it from a customer, as a rule, too many additional questions arise. The same cannot be said about CNC machines, which require a more detailed approach when choosing.

There may be several criteria on the basis of which the selection of equipment is carried out, whether it be cutting machines or hydraulic bending machines. They depend on real production tasks and the quality of the products. In this article, we will consider the choice of press brakes solely from the standpoint of their technical capabilities.

The upper beam of the press moves taking into account the developed force, return speed, approach and working stroke, bending length. It is these parameters that have a primary impact on performance. However, the most important parameter is still the positioning accuracy, since the bending angle depends on it. Almost all press manufacturers provide control of this parameter by mounting on the side racks of the optical ruler equipment. It is required that the positioning accuracy is within 0.01 mm. This is due to the fact that a change by this value leads to an error of 1 ° at a bending angle of 135 ° (die opening is 4 mm). The smaller the thickness and the larger the angle, the more the position accuracy has an effect on the angle accuracy.

The most important challenge for press manufacturers is the synchronization of positioning and movement. If there is a difference in positions, then the angle of the product along the bend length will also be different. In addition, the skew of the upper beam can also be programmed. This is required if you want to get different angles on the right and left side of the bend line.

The movement and positioning of the upper press beam are closely related to two of their features. The first is the time of delay and retention of the effort at the lowest point. This time has a direct impact on the fixing of the angle and is important for its correction and automatic control during adaptive bending. The second feature is to compensate for the opening of the side struts of the press brake at the moment of the position of the force. Most manufacturers include brackets with limit switches for this correction as standard equipment.

One of the machine axes, which determines the compensation of the deflection of the beams, affects the constancy of the angle along the entire length of the bend. At the moment of application of the force of the upper beam along the vertical axes, the upper and lower beams bend from the middle to the lateral sides. As a result, different angles are formed along the bend line. To somehow optimize this effect, manufacturers have resorted to various deflection compensation systems known as "bomb systems". The principle of operation of the wedge system is based on the displacement of the top of the table in relation to the bottom; in this case, the angle of the wedges decreases from the center to the edges of the table.

A wave system is similar to a wedge system, but instead of wedges, it uses a wave profile. In addition, there is a system of special cutouts in the lower beam to compensate for the effects of the resulting beams' deflections. Another option is a system of hydraulic cylinders that are built into the bottom beam.

There are 2 types of deflection compensation systems - with manual setting of parameters and with CNC. Press brakes with CNC allow you to automate the metal bending process and store information about materials, parts and their thickness in the equipment memory. It is advisable to use the deflection compensation system if the bending length is more than 2000 mm. With this system, a constant angle can be obtained along the entire length of the part.

Talking about changes in the position of the deflection compensation system of beams and the upper beam, we focused on the position of the lower point of the punch. In turn, the positions of the backgauges along the axes guarantee the positioning of the workpiece, which helps to determine the dimensions of the shelves of the parts. When choosing the number of CNC controlled axes and the design of the back stops, it is necessary to be guided by the complexity of the parts that are planned to be produced. Manufacturers themselves offer many options for solving this problem. The simplest and most obvious is the movement of two stops in double form and setting the stops along the axes in manual mode. This pattern of stops is especially effective in the production of simple parts that do not require positioning at a height.

All materials have a certain coefficient of springback and, when deformed, tend to return to their original shape. When performing free bending, during the release of the force, the corner opens, so it needs to be adjusted. As a rule, the operator, at the moment of starting the part in production, performs the first bend and measures the obtained angle, after which he introduces a correction for the difference in angle. This is followed by a new bend, another angle measurement, etc., until the required one is obtained. Thus, the problem of obtaining the required bending angle from the very first time is very urgent.

There are several ways to solve this problem. First of all, you need to find out the requirements for such devices or selection criteria. The system must have a high baud rate CNC interface, otherwise the bending process will be very slow. In addition, the system itself should not interfere with the bending process. It is very important that it is sufficiently functional, adapted to work in difficult conditions and does not depend on changes in the physical characteristics of the material being processed (its hardness, thickness, etc.) and the level of tooling.

Some manufacturers resort to laser bending angle control. This method is based on projecting a large number of laser points onto the matrix surface and the part shelf. The points are projected by radiation cameras mounted on both sides of the lower table.

The real-time measurement results in the angle. All measurements go to the CNC, where the angle is automatically corrected. The correction system operates in two modes: angle control and springback measurement. In the first case, the data is obtained on the basis of the springback value set in the CNC. When measuring springback, the data is stored for later use in the process of manufacturing parts from this material.

There is another system, the principle of which is based on the use of mechanical sensors built into the elements of the tooling. This system, like the previous one, measures the angle and performs its correction. All operations are performed based on the information received from the sensors.

Another system eliminates the need for real-time angle measurements. It accurately measures the pressure level in the hydraulic system and determines the angle based on the position of the punch at the lowest point.

Separately, it is necessary to mention press brakes with a capacity of up to 3-5 thousand tons and sheet bending equipment in tandem design. Equipment of this type is produced by a limited number of manufacturers, since it is very difficult to implement the requirements listed above on such machines. In the event that it is necessary to achieve bending with a length of 10 m or more, it is more expedient to use two tandem presses (working synchronously). At the same time, the presses themselves may differ in force and bending length. When calculating the total force, it is necessary to proceed from the lower force per meter of bend length.

The advantages of the tandem scheme are that the presses can be used both synchronously and each separately. Note that the cost of purchasing and equipping a tandem solution (for example, two 6 m machines with a force of 640 tons each) is lower than for one press (bending length - 12 m, force - 1280 tons).

In conclusion, we note that at present one of the most demanded hydraulic press brakes are presses of the Abamet brand. It is distinguished by reliability, functionality and unpretentiousness in technical and service maintenance. In terms of price-quality ratio, Abamet hydraulic plate bending equipment is in no way inferior to the solutions of many well-known manufacturers.