Browse Articles  »  Technology  »  Scientists at the TIFR Have Discovered an...

by Rudy P. SysAdmin at howtofindthemoney
Converting the global-warming compound carbon dioxide into a useful fuel has been engaging the attention of scientists for some time. Other scientists and technologists are splitting their hairs over how to store hydrogen, a good energy carrier. A way to kill both the birds with one stone is to get carbon dioxide react with hydrogen to make methane, a fuel.
Scientists at the Tata Institute of Fundamental Research (TIFR) have discovered an easier and cheaper way of converting CO2 into methane.
Scientists have generally used metal nanoparticles as catalysts for this process. But TIFR employed ‘defected silica’ — silicon dioxide with a few oxygen atoms knocked off — instead of the costlier metal nanoparticles.
“The process involves passing CO2 and hydrogen at atmospheric pressure through a bed of defected silica which is headed to 400° C,” Vivek Polshettiwar of TIFR, who developed the process, told BusinessLine. 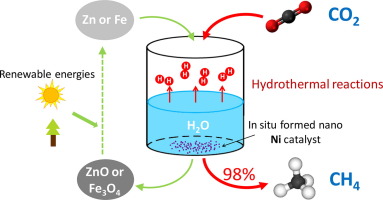 ‘Defected silca’ has ‘holes’, where the oxygen atoms used to be. These holes get filled by hydrogen atoms to form silicon hydride. For this, hydrogen molecules, that exist in nature in pairs (hence H2) are ripped apart. Each hydrogen atom, then, is desperate to join hands with something; alongside, defected silica is agonising for something to fill the gap where earlier oxygen atoms used to be. A happy marriage results.
But this marriage is short-lived because carbon dioxide dives in to break the marriage. The carbon in CO2 and the hydrogen in silicon hydride desert their spouses and join hands to become methane. The leftovers, silicon and oxygen, re-marry to form silicon dioxide — the original catalyst.
Shorn of technicalities, this process ‘cooks’ methane using carbon dioxide, hydrogen and silica.
Better catalyst
Polshettiwar says he finds silica to be a much better catalyst than metal nanoparticles, which are not very stable. This process involves for the first time a “metal-free, ligand-free” catalyst. At present, the process needs heat of 400oC, but “we are trying to develop a ‘room temperature’ process, using sunlight,” he said.
This process has some significant advantages over others. The ‘defected silica’ performs two functions — ripping hydrogen molecules into two single atoms of the element, and ‘activating’ carbon dioxide, ie, increasing its capacity to react. “Metal nanoparticles were not required, and the defect sites alone acted as catalytic sites for carbon dioxide activation and hydrogen dissociation and their cooperative action converted CO2 to methane,” says a TIFR statement.
Furthermore, they found that the more the catalyst (defected silica) was recycled, the higher was methane production. Production of methane doubled after eight regeneration cycles.
“CO2 conversion to methane using renewable hydrogen has the great potential to provide a solution to these two problems of excessive CO2 levels and the temporal mismatch between renewable electricity production and demand as well as hydrogen storage,” says TIFR.
Significant advancement
While it is too early to declare the process a candidate for Nobel Prize, it does appear to be a breakthrough of sorts. Scientific literature abounds in various methods for converting carbon dioxide into methane, but they all involve rare metals or are not efficient.
In February, Yasushi Sekine of Waseda University developed a process that involved nano particles called cerium oxide and a rare, inert metal called Ruthenium as catalyst. The process required an electric field.
A year ago, a team of researchers from Université Paris Diderot in France and Universidad Nacional de Córdoba in Argentina has discovered a reaction process that can be used to convert carbon dioxide to methane. However, the researchers acknowledge that the process is grossly inefficient because the product produced is actually 82 per cent carbon monoxide. It is also very slow, producing just 12 grams of methane per hour.
TIFR’s process therefore represents a significant advancement in the science.
The 10 largest coal producers and exporters in Indonesia:
Click Here! Top Clean Coal Contractors for Power Plant, Gasification, Liquefaction and Emission Control System
Source: The Hindu Businessline