Russia in Africa: No diversification – no further strengthening of relations 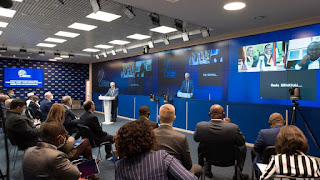 Lately more and more people have started talking about Russia's return to Africa, even though Russia's activity in Africa in recent years has come as a surprise to many in the diplomatic and expert circles of the West. Russian diplomatic relation with African states, that go back to the Soviet Union, were put on hold because of the collapse of the USSR and moved to the active stage of rebuilding in the 21th century. As stated by the Russian Minister of Foreign Affairs Sergey Lavrov, Russia and Africa maintained traditionally friendly relations that are based on the principles of equality, mutual respect and consideration for each other’s interests. Russia has never been involved in colonial wars in the region, nor did it plunder Africa’s resources. On the contrary, Russia has invariably opposed various manifestations of racism and provided all kinds of support to the African peoples in their struggle against colonialism.

Over the past few years, Russia‘s sphere of influence in Africa has been strengthening and broadening with much focus on helping to maintain peace and security, and making investment in exploiting natural resources in Africa. Despite some fruitful diplomatic and economic ties, the position of Russia on the African continent is rather volatile, and it is for the diplomatic body of the Russian Federation to ensure a more stable environment that will open the African market for more Russian investors.

According to Hans De Marie Heungoup, a senior analyst for Central Africa at the Crisis Group, the major problem of the Russian diplomatic policy in Africa is that Russians are not present in the development and in the humanitarian sector, and in terms of cultural influence, it is almost non-existent.

The new international reality exposes the problems that have long existed in Russian-African relations. Acceleration of the change in the present days make it increasingly difficult for Russia to rely on Soviet developments, especially when it comes to the cooperation in the sphere of education. The USSR managed to bring up the future elite of African countries (party members, professional military personnel, production managers, engineers and doctors). The graduates of the modern Russian universities from Africa, however, still have to fight for their place in the labor market.

The diversification of the spheres of interests may help to involve more people into the cooperation and further strengthen the ties between African and Russia, bringing more Russian investors to the continent and enriching both sides through cultural exchange. One cannot accuse Russian diplomacy of the lack strategy skills, as the aim for the diversification of the relations has been set several years ago, during the 2019 Summit. However, the implementation pace is rather slow.

Will the Foreign Ministry of the Russian Federation step up their game to get the Russian-African relation to the next level?