Prime Reasons to Choose Flutter For iOS Development In 2019

Are you looking forward to making an app that can help your business to grow? If yes, then there are certain things that you need to look out for in order to get the best outcome possible. Businesses these days need to make an integral choice on what platform they should choose for maximum visibility. Well, if you fail to do so, then you’ll become just another failed business idea that has become quite usual these days. 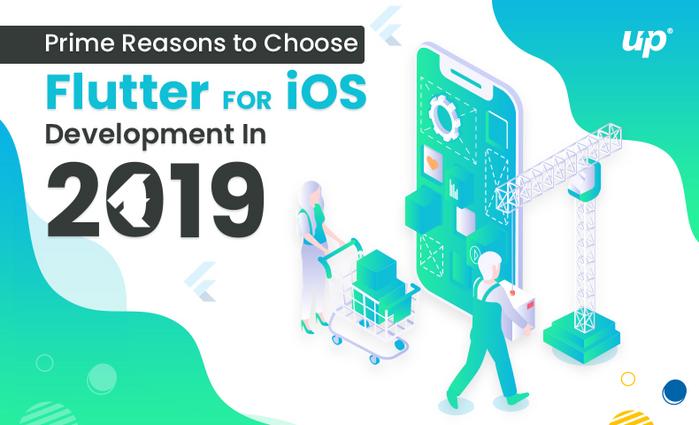 We, being a mobile app development company in the USA, would like to clarify that sometimes cross-platform app development can turn out to be problematic. Evidently, in most cases, we’ve witnessed no matter how hard a developer works, the user experience tends to lag behind that of native apps. However, quite recently we witnessed a framework that can match or even outrun the likes of React Native, Xamarin, and Angular JS.

Yes, today we’ll be talking about Google’s Flutter. Based on Dart, Flutter works exceptionally well with Google’s Material Design specification; most famous for the “card motifs” that Android users have come to know.

Why You Should Consider Cross-Platform Development Over Native Development?

Being a developer you must be aware of the fact that Flutter uses the same code base for an app. with such a plus point, it becomes easier for app testers to test the app on different devices in a single platform.

In the app development industry or any other business, time is money. We, being an app development company incorporated Flutter to cut out as much time as possible which leads to faster app development and testing. With Flutter, you can save a lot of money.

Since Flutter uses same the code base for iOS app development, it saves a lot of time of app developers as they don’t have to write repetitive codes or functions in different languages.

A cross-platform mobile app gives you business a wider reach that couldn’t have achieved with native app development as it reaches a wide range of audiences.

Now that we are done telling you how cross-platform app development is better than native app development, it’s time for us to describe the thing which you came here for.

Why You Should Prefer Flutter For iOS App Development?

From the above facts, it is quite clear that Flutter is a cross-platform application framework, but the question here is “why choose Flutter than any other framework that we have access to?” well, as far as experience is considered, we came to know that Flutter is efficient and is quite popular in iOS app development market. Now, if you’d like to know more about its benefits then make sure to continue reading this article.

What’s best about Flutter is that it doesn’t use the components of an OS platform to build a UI; instead, it is capable of making its own UI which later on can be used across multiple OS platforms. Other cross-platforms out there are partial with UI rendering as they leave out certain components and features. However, that’s not a thing you’ll notice in Flutter, instead, it renders the app to the OS.

Being a top smartphone manufacturer, Apple puts delivery and integration in top priorities, which for the reason Apple was using Xcode server. However, many iOS developers and companies complained that Xcode server was not scalable enough when it came to large projects. And that’s where Flutter swoops in with its high scalability and topping things off with faster integration and delivery.

This here is one of the aspects for which Flutter is mostly known for. Flutter does not require the developer to recompile the code whenever the changes are made. The change is visible immediately after it is saved, which increases the developers’ performance considerably. The framework connects the designer and developer and facilitates easy collaboration.

Flutter is literally the main player who took the whole concept of fast app development to another level. There are cross-platform development networks that use different compilers to compile codes for different iOS platforms. However, Flutter, on the other hand, uses Dart programming language for compiling and interpreting the code

Are you looking forward to making an iOS app? well, if that’s a yes, then you’ll be happy to know that Fluper would be very happy to help you out. Being a top-rated app development company, Fluper and its developers provide the best-in-class services that’ll ultimately lead to the creation of a well-rounded application.