by Rudy P. SysAdmin at howtofindthemoney
The world emits a lot of carbon dioxide – about 37 billion metric tons a year. But what if we could capture some of that CO2 before it reaches the atmosphere and do something useful with it instead?
Engineer Florian Möllenbruck has set his sights on making this vision a reality. After being awarded the Werner von Boie Award for 2019 for his research on synthesizing methanol from gas-fired power plants, the Mitsubishi Hitachi Power Systems (MHPS) engineer is now applying this know-how to the transport sector.
The technology holds considerable potential to capture and utilize CO2 from gas-fired power plants, while simultaneously producing synthetic liquid fuels, which among many uses can help in cutting the CO2 emissions of petrol and diesel vehicles.
Here, Möllenbruck discusses his work at MHPS, part of Mitsubishi Heavy Industries (MHI) Group, and explains why winning the award was a highpoint of his career to date.
What led you to work in mechanical engineering and the field of power plant technology?
I've always been enthusiastic about technology. As a young child I was fascinated with making things and spent hours building technical Lego sets.
Like many children, I was inspired by my father. He worked as a civil engineer, so we were constantly discussing the projects he was involved with, looking at their challenges and finding solutions. I inherited my joy of technical things from him.
In my mid-teens, I began working with my father at weekends, while at the same time completing an internship as a technical draughtsman.
My interest in power plant technology developed during lectures on thermodynamics at university, which I found fascinating. The idea of generating power and creating new fuels grabbed my attention and set me on my current career path.
“We have an opportunity to help decarbonize sectors like transport, which could contribute to tackling climate change and improve people’s lives.”
What does your work involve and why did it earn you the award?
The award was in recognition of my PHD thesis, which explores the creation of synthetic fuels like methanol from gas-fired power plants.
I am immensely proud to receive such an honor as it confirms the work I am doing and motivates me to develop my research further.
Basically, CO2 is harnessed from the flue of a gas-fired power plant using carbon capture utilization and storage (CCSU) technologies, then purified. Using hydrogen produced from surplus renewable energy sources, like wind or solar power, the captured CO2 is then compressed and turned into synthesized methanol.
Using hydrogen produced from surplus renewable energy, carbon dioxide is compressed and turned into synthesized methanol. MEFCO2
As well as generating synthetic fuels using captured CO2, which reduces emissions from fossil-fueled power plants, the process creates a method of storing surplus energy from renewables that might otherwise be lost.
Since joining MHPS, I have conducted power-to-fuel research. This involves linking the power and transport sectors to produce electricity-based synthetic fuels – also known as E-fuels – like methane, methanol, or even synthetic gasoline, for the transport sector. The research has passed the testing stage and is now ready to be scaled up for commercial use, once we identify a suitable project.
“The fuels of the future will need to be ecologically as well as economically competitive.”
What excites you about your work?
In my profession, every day is different, so you never know where it will lead. We constantly face new challenges, which need all my experience, knowledge and creativity to resolve.
Of course, I couldn’t do what I do without a great deal of passion for engineering.
The team I am part of has an opportunity to help decarbonize sectors like transport, which could contribute to tackling climate change and improve people’s lives. For me, that’s very exciting and a great incentive to drive forward the work we are doing. 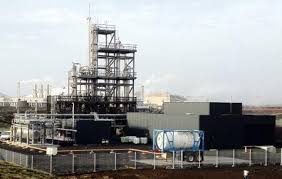 At the MHPS demonstration plant in Germany, carbon is used as feedstock to produce methanol.
How can the work you are currently doing make a difference?
Back when I started, the world knew about global warming, but the energy transition wasn’t as topical, or as urgent, as it is today.
The synthetic fuels we create can help reduce CO2 levels and have applications ranging from the chemical industry to gas turbines.
Fuels like methanol offer an alternative to petrol or diesel, which can often be used in existing internal combustion engines to cut exhaust emissions.
While there is a market for automobiles, the research’s main potential lies in its ability to decarbonize hard-to-electrify principal modes of transport, such as airplanes and ships. So, while our work may not decarbonize the whole planet, it will be able to cut the carbon footprint of specific sectors.
The fuels of the future will need to be ecologically and economically competitive. The technologies we are developing will be environmentally competitive in the short term, with the potential to compete on price once they are fully scaled up.
For more information about MHI Group’s work with synthetic fuels, don’t miss Synthetic fuels from captured CO2 and How to turn the wind into liquid fuels.
The 10 largest coal producers and exporters in Indonesia:
Click Here! Top Clean Coal Contractors for Power Plant, Gasification, Liquefaction and Emission Control System
Source:  Johnny Wood has been a journalist for over 15 years working in different parts of the world – Asia, Europe and Middle East. As well as an accomplished features writer he has edited several prestigious lifestyle magazines and corporate publications