by Rudy P. SysAdmin at howtofindthemoney
Slag and Ash
As discussed in the Background, solid waste from conventional pulverized coal-fired power plants is a significant environmental issue due to the large quantities produced, chiefly of coal fly ash, and the potential for leaching of toxic substances (e.g. heavy metals such as lead and arsenic) into the soil and groundwater at disposal sites, and accidental releases from coal ash ponds.

As opposed to conventional coal combustion, many types of coal gasification produce very little fly ash.1 This is a benefit of gasifiers operated at temperatures higher than the fusion point of ash (slagging gasifiers or agglomerating gasifiers, which include the most prominent coal gasification processes incorporated into IGCC such as GE Energy, E-Gas™ and BGL). At such high temperatures, most of the mineral matter of the coal is transformed and melted into slag, an inert glass-like material. Under these conditions, non-volatile metals and mineral compounds are bound together in molten form until the slag is cooled in a water bath at the bottom of the gasifier, or by natural heat loss at the bottom of an entrained bed gasifier. Volatile metals such as mercury are typically not recovered in the slag, but may be removed from the raw syngas during cleanup. Slag production is a function of ash content, so coal produces much more slag than petroleum coke. Regardless of the feed, as long as the operating temperature is above the fusion temperature of the ash, slag will be produced. Its physical structure is sensitive to changes in operating temperature and pressure, and physical examination of the slag’s appearance can often be a good indicator of carbon conversion in the gasifier.
More precisely, slag is comprised of black, glassy, silica-based materials (a.k.a. "frit", a high density, vitreous, and abrasive material low in carbon and formed in various shapes from jagged and irregular pieces to rod and needle-like forms) and residual carbon char, the proportions of which vary depending on operating conditions, gasifier, feed, etc. The two parts can be separated—they are not chemically bonded—and concentrated into carbon rich char and vitreous frit. Char has its own current and potential uses; see the following discussion. Vitreous slag is much preferable to ash, because of its habit of encapsulating toxic species (such as heavy metals) into a stable, non-leachable material. Leachability data obtained from different gasifiers unequivocally shows that gasifier slag is highly non-leachable, and can be classified as non-hazardous. Because of its particular properties and non-hazardous, non-toxic nature, slag is relatively easily marketed as a by-product for multiple advantageous uses, which may negate the need for its long-term disposal. Obviously, both the profit from using slag as a byproduct and avoidance of disposal costs combine to improve the economics of the disposition of slag, which is the major solid byproduct from gasification processes.
In summary, the high temperatures and pressures of gasification processes have the potential to turn mineral matter within the feedstock into slag instead of the ash that is produced in combustion. Slag captures toxics/heavy metals and does not allow them to leach out of the material, unlike combustion ash from which toxic species can possibly leach and find their way into groundwater and surrounding soils.
Char
Char is the finer component of the gasifier solid residuals, composed of unreacted carbon with various amounts of siliceous ash. It can be recycled back into the gasifier to increase carbon usage and has been used as a supplemental fuel source for pulverized coal combustion. The irregularly shaped particles have a well-defined pore structure and have excellent potential as an adsorbent and precursor to activated carbon. 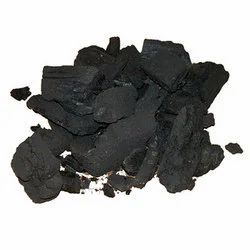 In a project between the Department of Energy (DOE) and CAER, potential uses of char were investigated, specifically as adsorbers for emissions control. Carbon char has the potential to control mercury (Hg) and nitrogen oxides (NOx) emissions. To test for mercury adsorption—an initial study only—a mercury vapor generator and a fixed bed reactor were used. A gas sampling system and vapor analyzer were used to assess the char’s performance. Untreated gasifier char was found to be as effective at adsorbing mercury as a commercially available activated carbon designed for Hg adsorption. Interestingly, all attempts to increase the porosity of the gasifier char lessened its adsorption potential, which seems to be related to the char mineral content (mainly SO4-2 and Cl-). Not having to treat the char is significant, as treatment would be an additional cost.
Additionally, gasification char adsorbed significantly more NOx than all other test materials except for a specially designed activated carbon NOx adsorber. For this test a thermal analyzer and mass spectrometer were used. The char performed 30% as well as the specially designed activated carbon adsorber. After increasing the surface area of the gasifier char, it increased NOx capacity, while char that was laden with Hg adsorbed more NOx than Hg-free char. This presents the possibility of using gasifier char to adsorb Hg while also adsorbing some NOx prior to an activated carbon NOx adsorber. Naturally, the gasifier char, a "waste," is significantly less expensive than a specialty adsorber and being able to put it to good use makes plant operations more economical.
The 10 largest coal producers and exporters in Indonesia:
Click Here! Top Clean Coal Contractors for Power Plant, Gasification, Liquefaction and Emission Control System
Source: US National Energy Technology Laboratory