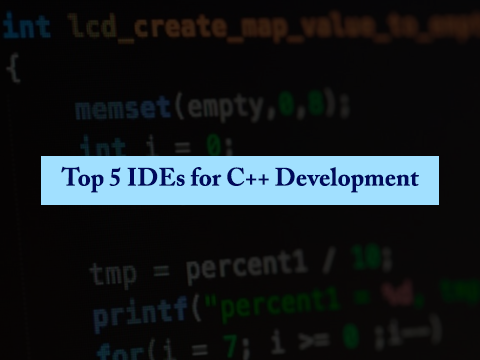 IDEs or Integrated Development Environments are software applications that facilitate developing computer programmes and software on a single or multiple programming languages. IDEs can be language-specific or may support multiple languages. IDEs make it easier for developers to write programs, find faults, and debug them. They are a significant improvement over command line interfaces because of the extensive provisions they offer.

The components contained in an IDE can be usually classified into three major categories: a source code editor, build automation tools, and a debugger. In some cases, an IDE may also have an interpreter or a compiler or both. Examples of such IDEs are NetBeans and Eclipse. However, there are others that may not have any interpreter or compiler. Examples could include SharpDevelop or Lazarus.

Although there are several IDEs available, some open source and some licensed, listed below are five top five such IDEs that are the most sought after.

Dev C++ is an open-source IDE that houses features like code completion, tool manager, integrated debugging, syntax highlighting, GCC-based compilers, profiling, etc. It is a feature-loaded graphical IDE that uses the MinGw compiler system to create Windows-based C/C++ applications. It can also be used with other GCC-based compilers, such as Cygwin. It was originally developed by “Bloodshed Software”. Read full blog here - List of Top 5 IDEs or Source Code Editors a C++ Developer Should Know