Is Ethereum a good investment?

Why is Ethereum valuable?

The Ethereum blockchain is a protocol that operates on the laws of mathematics. Unlike a central bank or government, who can quickly and unexpectedly adjust money supply, Ethereum’s coin distribution is written into immutable code that is publicly available and agreed by consensus. It is the blockchain’s unbreakable encryption and mathematical truths which back this digital asset, as opposed to gold or government promise.

Ethereum is an inflationary currency; 2 new Ether coins enter the system whenever the next valid block in the blockchain is found (a block is found roughly every 15 seconds). The process of finding blocks is a separate topic but the key point is that – unlike Bitcoin, whose supply is capped at 21 million coins – there is no limit on the amount of Ether that will be issued over time.

However, this rate of inflation will decrease over time as the aforementioned issuance of 2 Ether becomes a smaller percentage of the overall coin supply.

Furthermore, the planned network transition from proof of work (mining) to proof of stake will remove the role of miners, replacing them with a low-energy and low-cost alternative that requires a smaller block reward. While the exact supply inflation rate of ETH in 2 years time is not known, it is extremely likely to be lower than it is today. 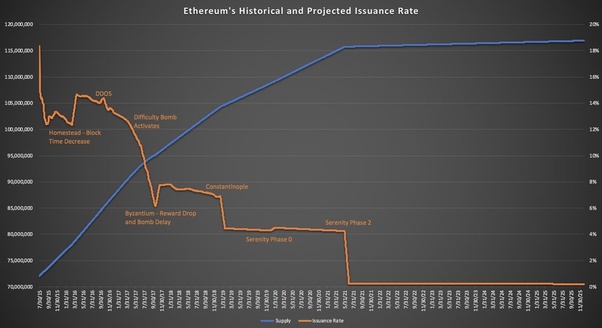 Transactions on the Ethereum blockchain are valid based on a few factors, but the most obvious is that the user must have a balance greater than the amount they are sending. The purpose for which they are sending or receiving coins is irrelevant. Any user of the Ethereum blockchain – regardless of location – is able to decide how to spend their value without authorization. Having sovereignty over one’s wealth may seem unnecessary for many in the West but for those in developing nations, or countries experiencing hyper inflation and strict money controls, the ability to untether from their fiat currency system serves as an enormous benefit. Unlike the traditional fiat system, Ethereum offers users full sovereignty if they wish. Of course users can choose to trust 3rd parties if they would like to, but that is not a requirement as it is in the traditional banking space today.

Ethereum transactions are low cost and fast, capable of handling 15 transactions per second with protocol upgrades in the next 12 months that are anticipated to increase this figure to 1000+. To put that into perspective, VISA handles an estimated average of 2,000 transactions per second. Furthermore, 3rd party payment channels such as the Loom Network and FunFair’s “fate channels” have been developed which take transactions off of the Ethereum blockchain with only a small trade-off in security. These “off-chain” scaling solutions also help to reduce fees – increasing the capacity of the network by several orders of magnitude.

Whilst rare, there have been several horror stories of users losing thousands of dollars in Ether from poor due diligence. Here are a few of the key items to check off when making a transaction of a significant sum.

Copy and paste the address
Never type in a wallet address by hand. Addresses are long and case-sensitive, a single mistake will result in the funds being lost forever. There is no charge back or customer support number in Ethereum.

Check, double and triple check the address
Once you’ve copied and pasted the address which you wish to send or receive Ether to, check it over and over until you’re certain it’s correct. Looking at the first and last several letters/numbers will ensure it’s been pasted correctly.

Good wallet software will also confirm the address that you are sending or receiving to. This mitigates the risk of malware intercepting and replacing the address you input.

Test your transaction
One of the driving forces behind Ethereum adoption is the low transaction fees. There is no harm in sending a negligible amount of Ether in order to test your understanding of the process and that all of the details are correct. This will ensure that everything goes smoothly when sending larger amounts.

This section of the guide intends to simplify the process of securing Ethereum for non-technical users. This method of security hands over management to the exchange with which you purchased Ether.

In this instance, users can secure their newly purchased Ethereum by leaving it in their wallet on the exchange itself.