by Rudy P. SysAdmin at howtofindthemoney
Just as the first casualty of war is truth, the first casualty of this General Election campaign is a coherent environment policy.
Since the starting gun was fired last week, all the parties have been behaving as if the election will be decided entirely by members of Extinction Rebellion, falling over themselves to tell us how they are going to make us all pure.
Labour says it is going to turn the whole country carbon-neutral within just 11 years. Shadow Chancellor John McDonnell suggested that Labour might abandon a third runway for Heathrow.
The Conservatives, meanwhile, have announced an immediate moratorium on fracking. 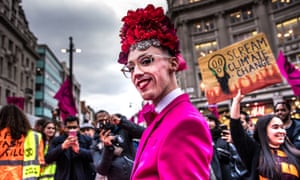 What none have managed to do, however, is explain how they are going to keep the lights on and the country moving.
Of course voters care about the environment, but they also care rather a lot about how they are going to heat their homes and get to work, and about what happens if more and more planes have nowhere to land and take off.
What we are getting at the moment is just electoral greenwash – irresponsible environmental commitments which totally ignore the needs of the economy.
Yes, if we really wanted to we could turn Britain carbon-neutral by 2030. But we wouldn’t have much in the way of industry left.
We wouldn’t even be able to build wind farms. They require large amounts of steel, an industry which, as yet, we have no idea how to decarbonise.
The Labour Party was founded to defend industrial jobs – now it has a policy which would destroy almost every one of them in Britain.
Meanwhile, being carbon neutral by 2030 would do next to nothing for the planet. Other countries – which account for 98 per cent of global carbon emissions – won’t be lowering their quality of life just because Labour has decided that Britain must retreat into pre-industrial poverty.
The rest of the world will carry on flying even if Labour cancels Heathrow’s third runway. In September, Beijing opened a new airport with seven. Istanbul’s new airport has six runways.
Yes, we need to make flying more environmentally friendly, but simply depriving London of runway capacity when other countries are expanding is just going to divert business and investment elsewhere.
The fact is that fantastic improvements in living standards over the past two centuries – which have doubled life expectancy from 40 to 80 as well as hugely enriching our lives – can be traced back to one thing: cheap energy. It was coal-burning that took us from being a mostly peasant society to an advanced industrial one.
Obviously we want to move away from dirty fossil fuels and develop cheap forms of renewable energy – and we have been. The last coal-fired power station in Britain is scheduled to close in 2025.
But we can’t just switch everything over to wind and solar. Total renewables accounted for only 11 per cent of energy consumption last year, according to Government figures.
Wind and solar are highly intermittent forms of power and we simply don’t yet have the technology to store vast amounts of energy.
Over the next few decades we are going to remain reliant on gas – a fossil fuel, obviously, but one which emits half as much greenhouse gas, unit for unit, as coal.
What’s more, UK-produced gas emits around 10 per cent fewer emissions than the gas we are currently forced to import from the US and the Middle East via refrigerated ships.
Which means the Conservatives’ decision to ban fracking will lead to the UK’s carbon emissions being higher than they otherwise need to be.
The Prime Minister used to recognise this, which is why he once supported the industry, saying he wanted to ‘leave no stone unfracked’. Now he has jumped on the anti-fracking bandwagon in the hope it will help him win a few seats in the North of England. Meanwhile, Labour’s energy spokesman Rebecca Long-Bailey has announced she wants to spend £60billion insulating 27million homes under a Warm Homes For All plan.
Don’t expect that to work either – it is just a super-heated version of David Cameron’s Green Deal, a failed scheme which the National Audit Office concluded in 2016 had ‘failed to deliver a meaningful benefit’, and merely drove up energy bills.
Like Long-Bailey, Cameron promised to train an army of tradesmen who would come and insulate your home.
The cost of repaying the loan for the work on your house, he claimed, would be covered by the savings you made on your energy bills.
Except it didn’t work out that way. Many home improvements saved much less energy than had been predicted.
And instead of creating a skilled workforce out of thin air, it attracted large numbers of cowboys who charged excessive sums for shoddy work.
I know how difficult it is to insulate an old house with solid walls because I have tried hard to do it with my own house. Some energy improvements, like loft insulation, are cheap and worthwhile.
But solid walls are another matter. If I put insulation on the inside I would have to move all my internal walls because it would make the corridor too narrow.
If I put the insulation on the outside it would create damp problems, because walls in an old house need to breathe.
I would be spending many thousands of pounds on the work – all to save less than £100 a year on heating oil and quite possibly to ruin my house, too.
Why are our politicians so pathetically in thrall to Extinction Rebellion? A group of Left-wing anarchists using illegal means to block streets and close down public transport has been allowed to virtually dictate environment policy. It is not a privilege which has been extended to other pressure groups.
This election was supposed to be about solving Brexit. That, it might nor might not achieve. But one thing it certainly isn’t going to do is give us sensible policies on the environment.
The 10 largest coal producers and exporters in Indonesia:
Click Here! Top Clean Coal Contractors for Power Plant, Gasification, Liquefaction and Emission Control System
Source: Daily Mail