by Rudy P. SysAdmin at howtofindthemoney
The coal ministry has big plans to utilise Coal Bed Methane (CBM) extracted from coal seams during the mining process for household energy purposes and will soon launch a large scale programme.
"The project is currently in the pipeline and an official plan to chalk out the strategy for aggressively pushing the CBM programme will come out within the next two years," a senior coal ministry official told ETEnergyworld.
Coal Bed Methane is a form of natural gas trapped underground in coal seams which can be extracted by drilling into the seam. It is now being considered as an alternative source for meeting household energy requirements.
India has the fifth largest coal reserves in the world and holds significant prospects for exploration and exploitation of CBM. According to the Directorate General of Hydrocarbons, the potential CBM resources in the country stand at around 92 trillion cubic feet (TCF) across 12 states.
"We will outsource the entire project and will go for global tendering. Coal India will outsource CBM production to global operators by appointing global Mine Development Operators from Coal India’s blocks. We have set the target for producing 1 Million Metric Standard Cubic Meter Per Day (MMSCMD) of CBM by 2023-24," a Coal India executive told ETEnergyworld. 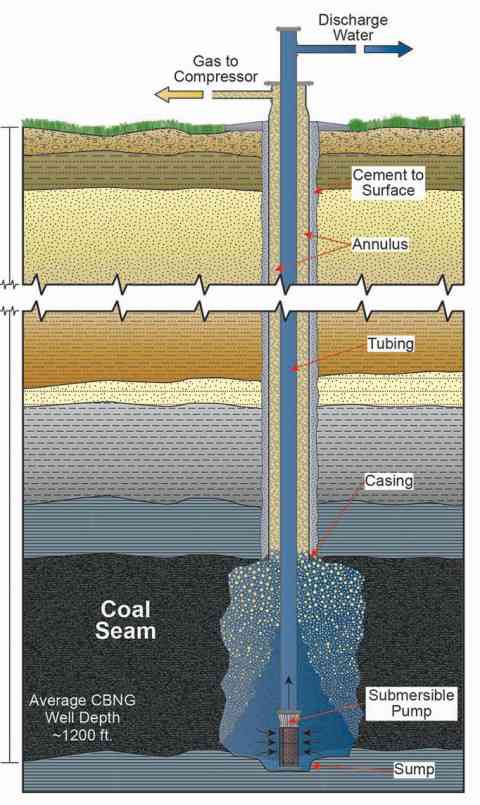 He added that as per Central Mine Planning and Design Institute (CMPDI) laboratory research, high grade coal with low ash and more carbon content, which is mostly a variety of coking coal, is best suited for CBM production and it is found mainly in areas like Jharia, Bokaro and Raniganj.
"Damodar valley coalfields currently have the maximum potential for CBM. Jharia coalfields hold reserves of 25 billion cubic metres and Raniganj coal block holds around 3 billion cubic metres of CBM trapped in coal seams," the CIL official said.
Methane released by coal blocks remains trapped in seams and escapes into the atmosphere during the coal mining process. When extracted in concentrated form, it can be used as natural gas that can be transported through pipelines.
"It is more like a value addition in our portfolio, where we will pre-drain the methane gas before beginning the mining process in the coal block. This will ensure mine safety as well as the use of the gas to meet energy requirements," the official said.
Expert says India is yet to fully tap into the opportunity for CBM production given the massive reserves. "Although the program has been there for the past 15 years, the actual production is still in single digits, which is around 2-3 MMSCMD with just 3-4 market players like Reliance Industries Ltd, Essar Oil and Gas, Great Eastern Energy and ONGC," said K Ravichandran, a Senior Vice President at ICRA.
He said that getting environmental approvals and dealing with local resistance are major challenges for CBM producers. "Unlike conventional oil and gas well, in the case of CBM companies have to drill a lot in wells to produce gas. Also, most of the CBM sites are located in isolated areas in the country, which are not well connected to the national grid, so there are no major markets nearby. Hence, the investments in the sector are lacklustre because of the lack of investment returns," he said.
Ravichandran also said the regulatory approval process needs to be much more simplified, especially on the front of environmental clearance. Also, unless the isolated regions with CBM potential are well connected to the national grid, its market cannot be expanded and therefore pipeline connectivity needs to be completed on a fast-track basis.
The 10 largest coal producers and exporters in Indonesia:
Click Here! Top Clean Coal Contractors for Power Plant, Gasification, Liquefaction and Emission Control System
Source: India Times