Browse Articles  »  Technology  »  India and the U.S. Have Announced Research on...

India and the U.S. Have Announced Research on Supercritical CO2 Power Cycles

by Rudy P. SysAdmin at howtofindthemoney
In order to explore new technology to meet energy demand through relatively cleaner ways, India and the United States have announced new areas of research on transformational power generation based on supercritical CO2 power cycles and advanced clean coal technologies.
Both the countries discussed this during the ministerial meeting of the US-India Strategic Energy Partnership (SEP) on Friday and agreed to collaborate on "advanced high-efficiency coal technologies with low-to-zero emissions” through carbon capture, utilization, and storage (CCUS).
The collaboration is focussed on the US department of energy’s (DoE) Coal FIRST (Flexible, Innovative, Resilient, Small, Transformative) initiative to develop 21st century coal energy systems, even as India has simultaneously been working on increasing its renewable energy capacity as per its commitment under the Paris Agreement on climate change. 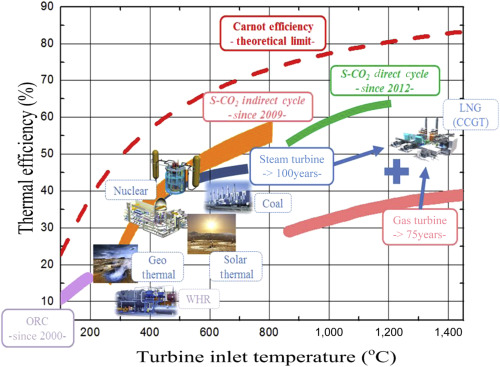 The move to work on cleaner coal technologies assumes significance as it comes at a time when India has launched the auction process of coal blocks for commercial mining to reduce the country's dependence on imports and make it self-reliant in the energy sector. New technologies will help India in using coal in a cleaner way.
The virtual SEP meeting was co-chaired by the US secretary of energy, Dan Brouillette, and India’s minister of petroleum and natural gas Dharmendra Pradhan.
“The one of the notable outcomes of the dialogue is participation of India in the multilateral platform for Accelerating CCUS Technologies (ACT) through which avenues have been generated for possible US-India collaboration,” said Ashutosh Sharma, secretary, department of science & technology (DST), who attended the meeting.
Indian officials, quoting the US DoE’s National Energy Technology Laboratory (NETL) research, said that coal-fired electricity generation can be cleaner than ever if coal plants adopt pollution control measures. Ironically, many coal-fired power plants in India have not complied with emission standards and failed to install required equipment to curb air pollution despite given extension of deadline to do so.
According to the NETL, a new coal plant with pollution control measures can reduce nitrogen oxides by 83%, sulphur dioxide by 98% and particulate matter by 99.8% compared to plants without controls.
The new emission standards for coal-based power plants in India were introduced in 2015. All plants were mandatorily required to comply with the norms by December 2017. This deadline was, however, later extended till 2022 when many plants raised practical problems in implementing those norms within that period.
Recently, the Association of Power Producers (APP) has demanded another extension for implementation of emission standards, arguing that the ban on Chinese power equipment would delay the plant operators’ ability to comply with emission regulations.
Experts, however, believe that India is in a position to construct retrofits without depending on China.
“It’s a ridiculous and an unjustifiable argument to make,” said Sunil Dahiya, analyst at the Center for Research on Energy and Clean Air (CREA).
He said, “Companies like BHEL have the technology and can adapt it to our needs. China is not the only supplier. Besides, Atmanirbhar Bharat initiative is all about producing locally. The only thing stopping pollution control technology installation is not funds or lack of tech supply, but lack of willingness”.
During a webinar on the issue, organised by the Climate Trends and the CREA on Friday, experts noted that the power producers are spending lakhs of rupees in legal fees to delay implementation.
Calling it a criminal violation of an order of environment ministry and a clear lack of intention, environment lawyer Ritwick Dutta said, “The Covid-19 will be used as an excuse to further justify delays in 2022. The NTPC approached the Supreme Court four days ago to challenge an NGT order to cover coal carrying trucks with tarpaulin. If a basic pollution control measure like tarpaulins can’t be followed through, there is clearly no intention of complying.”
The 10 largest coal producers and exporters in Indonesia:
Click Here! Top Clean Coal Contractors for Power Plant, Gasification, Liquefaction and Emission Control System
Source: Times of India