by Rudy P. SysAdmin at howtofindthemoney
ICRA has revised the year-end outlook for the renewable energy (RE) sector, from stable to negative.
The sector is facing headwinds because of the long delays in making payments by the state distribution utilities, execution delays for projects bid out over the past two years due to challenges in completion, land acquisition difficulties, securing transmission connectivity and; financing in a timely manner.
Sabyasachi Majumdar, Group Head & Senior Vice President - Corporate ratings, ICRA, says, “The headwinds related to payment delays, uncertainty over resolution of tariff issue for projects in Andhra Pradesh, as well as execution and financing related challenges for under-construction projects have impacted investor sentiments in the sector. This is reflected from the slowdown in tendering of wind and solar PV projects by 37% to 10.6 GW in 9M CY2019 from 16.7 GW in the corresponding period of previous year. Moreover, many of bids called by central nodal agencies remained under-subscribed.” 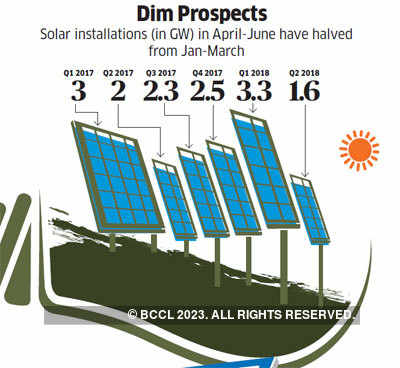 Given the ongoing challenges, ICRA expects renewable energy capacity addition to remain at about 8.5-9 GW for FY2020, which is similar to the capacity added in FY2019. The capacity addition would be primarily driven by the solar power segment. The share of renewable energy based generation in the overall generation mix at all India level is rising, as seen from an increase from 5.6% in FY2015 to 9.2% in FY2019.
The share of renewable energy is expected to reach closer to 10% in FY2020. This is owing to the large sized capacity addition witnessed in the wind and solar power segments during this period, driven by policy support from central and state governments as well as the significantly improved tariff competitiveness of wind and solar power vis-a-vis conventional power sources.
The average bid tariffs discovered in the auctions for wind and solar power projects in CY2019 so far remained at Rs. 2.7-2.8 per unit. While this is higher than the low of Rs 2.4 per unit discovered in CY2018, the tariffs continue to remain less than Rs 3.0 per unit, given the imposition of tariff cap by the nodal agencies.
“Further, viability of such tariffs from the IPP perspective would critically depend upon the capital cost, PLF level and access to cost competitive debt funding over a longer tenure. Also, the long-term demand drivers for solar and wind energy remain intact, given the strong policy focus and significantly improved tariff competitiveness from the off-taker’s perspective,” says Girishkumar Kadam, Sector Head & Vice President, Corporate Ratings - ICRA.
On the other hand, the decline in bid tariffs and slowdown in capacity addition in the wind power segment has put pressure on the credit profile of some of the wind turbine OEMs, which in turn has affected the wind turbine machine availability for few IPPs. As a result, IPPs are exploring either in-house O&M or through third party services. Their ability to ensure the desired machine availability as well as spare parts remains critical for the operations, especially in cases where wind turbine OEM is financially stressed.
The payment timeline has witnessed significant deterioration for Wind IPPs in Andhra Pradesh and Telangana, with delays of more than 12 months. While the provision of letter of credit (LC) or advance payments has been made mandatory w.e.f. August 1, 2019, the implementation of the same has been mixed so far with many of the intra-state RE projects not receiving the LCs. Moreover, this does not address the issues pertaining to recovery of old receivables. The IPPs with large exposure to the discoms in Andhra Pradesh and Telangana and belonging to the promoter groups having relatively modest financial strength, remain vulnerable from debt servicing perspective.
The 10 largest coal producers and exporters in Indonesia:
Click Here! Top Clean Coal Contractors for Power Plant, Gasification, Liquefaction and Emission Control System
Source: The Hindu Businessline