by Rudy P. SysAdmin at howtofindthemoney
Hydrogen's big step forward
The attractiveness of hydrogen power has long been that it simply combines "hydrogen fuel" (H2) with oxygen (O2) in the air to create energy with a byproduct of water. It's a 100% clean conversion. The problems had always been that fuel cells were expensive and making hydrogen fuel itself wasn't particularly environmentally friendly because it's primarily derived from natural gas.
A dream scenario is producing hydrogen fuel using electricity from renewable wind and solar energy power plants and a technology called electrolysis. Electrolysis is simply putting an electrical charge into water to split the water molecule (H2O) into hydrogen and oxygen. It's the reverse reaction that takes place in a fuel cell, but in this case energy has to go in to create storable hydrogen energy. 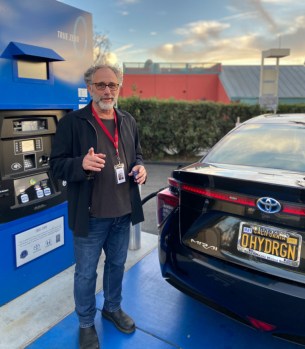 Electrolysis doesn't make environmental sense if you're burning coal or natural gas to produce the hydrogen, because that would be dirtier, more expensive, and less efficient than just creating electricity on-demand for the grid or burning gasoline in a car engine. These traditional fuel sources are effectively an energy storage medium, which is what hydrogen acts as for renewable energy.
If the cost of electricity from renewable energy is cheap enough, it could be possible to use wind or solar power plants to provide energy to electrolyzers to produce hydrogen fuel that could be stored and transported for later use. Bloom Energy says it can now leverage existing cheap wind and solar electricity and a new solid oxide electrolyzer to produce hydrogen fuel that will be on par with gasoline fuel as far as costs go. That's a game-changer in energy.
Where hydrogen use makes sense
Hydrogen fuel doesn't make sense for every energy application, but it can be used in some logical scenarios relatively quickly. The best scenario for hydrogen fuel is storing energy from renewable energy sources for use at a later time. Grid-connected fuel cells are already in-service and manufacturers like Bloom Energy are building more every day.
Transportation is another high-potential market for hydrogen and fuel cells. Long-haul trucking is an application where fuel cells makes sense and Nikola Motors is one of the companies building trucks for this market. Bloom Energy recently announced a deal with Samsung Heavy Industries to develop fuel cell-powered ships. The deal could lead to 300 megawatts annually in ship demand. And this could be a simple and economical replacement for fossil fuels in maritime transportation -- especially if it's cheaper than fossil fuels for shipping companies.
Hydrogen could change everything
Few energy innovations have an opportunity to upend the entire energy industry, but hydrogen could facilitate just that. It could make wind and solar more viable as year-round sources of energy, using hydrogen as a storage medium. Hydrogen could be used to make long-haul trucking and shipping fully clean. It could essentially replace fossil fuels as an energy medium.
If Bloom Energy can build an economically viable electrolyzer and fuel cell combination, it could upend energy as we know it, and that makes it a company worth keeping an eye on.
The 10 largest coal producers and exporters in Indonesia:
Click Here! Top Clean Coal Contractors for Power Plant, Gasification, Liquefaction and Emission Control System
Source: Fool