How Safe Is Bypass Surgery for Heart Disease?

Bypass surgery involves using clean blood vessels from elsewhere in the body to create a detour around the clogged arteries near the heart which is hailed as one of the great success stories in medicine. In the year 2005 around 280,000 Americans have undergone this procedure to relieve the symptoms of heart disease and prevent heart attacks. This is really the only treatment option for patients with severely clogged arteries and people with three or more blockages.

Cardiac Bypass Surgery is done to replace the damaged arteries in the heart muscle. A surgeon will use the blood vessels taken from another area of the body for repairing the damaged arteries. In the year 2011, doctors have performed 213,700 such surgeries in India. This surgery is done when the coronary arteries become damaged or blocked. The arteries supply oxygenated blood to your heart. If these arteries are blocked or if the blood flow is restricted then the heart doesn’t work properly which can lead to heart failure. 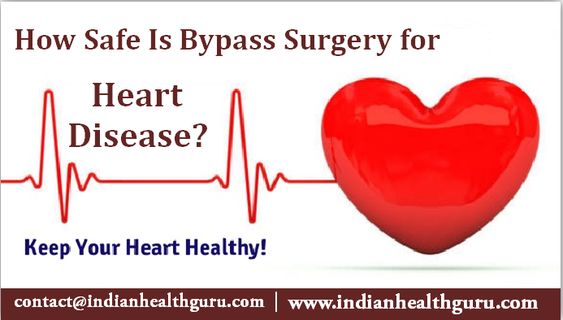 The failed bypasses are uncommon especially at the hands of an experienced and well-trained surgeon. Still, the agencies often keep track of such setbacks as a way to grade hospitals. Some state health agencies issue the annual report cards which show the hospitals are performing the most bypass surgeries in India and getting excellent outcomes. In the year 2003, the Consumer Reports have compiled a list of links to the hospital report cards from the state agencies and various independent rating services. The big deal bypass surgery was very high tech.

Your chest, arms, and legs will be shaved and the skin washed with the antiseptic solution. It is quite important not to eat or drink for some time before the operation. You are given a pre-medication injection to make you feel drowsy and dry up the internal secretions. The heart bypass surgery is done under general anesthesia. The saphenous vein from the leg, the radial artery from your wrist or the internal mammary artery from your chest wall can be used as grafts. Often between two and four coronary arteries are grafted depending on the severity and location of the blockages.

The surgeon will access your heart using one of the two possible incisions either cutting beneath the left nipple called thoracotomy or cutting down the length of your breastbone or median sternotomy. A heart-lung machine will maintain the blood circulation while the heart is stopped deliberately. The artery or vein is then grafted onto the narrowed segment of the coronary artery that allows the blood flow to bypass the blockage. In some cases, this operation is done while the heart is still beating, also called off-pump surgery.

Do not assume that you will have guaranteed good results just because your hospital performs a lot of operations. As per the study in the year 2004, the sheer volume does not matter much when it comes to bypass surgery. The veritable bypass surgeries may be somewhat safer for the patients above 65, however, the big difference has not been shown.

No matter which hospital you choose, the bypass surgery has few risks. Nearly two percent of patients die in the hospital or within one month of the surgery. In a study conducted in 2001, it was found that around one in four patients develops cognitive problems which remained evident six months post-surgery. Another recent study found that over 7% of all bypass patients experience acute kidney failures. Some of the most common complications associated with bypass surgery are the irregular infection, heartbeat, brain-related problems, reduced kidney function, and heart attacks.

Some are patients such are those in their 70’s and beyond are more likely to suffer the complications as they are more vulnerable. Also, this operation is riskier for people with additional illnesses such as emphysema, diabetes or kidney failure.