Browse Articles  »  Society & News  »  How NGOs play a role in developing a better...

How NGOs play a role in developing a better society?

Like it or not, inequality and socio-economic differences do exist around us. The terms ‘haves’ and ‘have nots’ describe the two sections of the society where ‘haves’ are the privileged class who can provide for themselves and ‘have nots’ are the underprivileged class who are deprived of even the basic necessities such as food and shelter. In a scenario like this, the intervention of non-governmental organisations usually referred to as NGOs play a vital role. 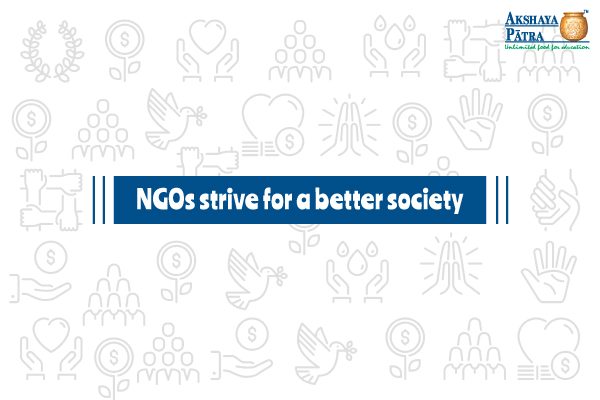 The NGOs work towards uplifting the socio-economic status and general well-being of the ‘have nots’ by garnering support from the ‘haves’. The work of NGOs encompasses various spheres such as human development, conservation of the environment, animal welfare, and more. And, since the operational structure of NGOs allows them to get involved more closely with a particular issue, these organisations can deal with issues in a more focussed manner, right from the ground level.

There are charitable organisations in India that work towards supporting education of underprivileged children by providing them with school lunch. The NGOs like TAPF is striving to positively impact the society by empowering children with health and education. Akshaya Patra began its service to children as a Bangalore NGO way back in 2000 by providing nutritious meals to just 1,500 children in five schools of the city. It implements the Central Mid-Day Meal Scheme and has been recognised as the largest NGO-run school lunch programme.

Role in bettering the society through mid-day meal

The role as a mid-day meal NGO is to support education of children by providing them plate full of nutritious lunch on each school day. This meal acts as an incentive for socio-economically backward families to send their children to school. This begins the foundation for a healthy generation. In addition, once the children are at school, they also receive education that form the base for a literate society. By ensuring the expanding its role of NGO in India, Akshaya Patra is striving to make the society a place of healthy and educated children right from the grass root level. And, when the children are healthy and educated, they bring about a change in the social and economic status at an individual level, and this progress collectively uplifts the entire society.

The impact of this charitable organisation in India becomes evident from the results of many impact studies done in association with third-party research agencies. Conducted at regular intervals, several impact studies testify that the mid-day meal has significantly increased school attendance and enrolment, decreased drop-out rate, improved health, as well as enhanced socialisation among children. This impact has also been acceded by school teachers and headmasters of Akshaya Patra beneficiary schools:

-              Ismail Malik, Principal, Antti Kumar Prathamik Shala, Padra Taluk, Vadodara, Gujarat said, "The mid-day meal has brought a tremendous decline in the student drop-out rate. In the primary school, the increase in attendance is nearly as high as 60% to 70%. The numerous awards that now decorate the school office are a testimony to this."

Partner for a better society

The work of any NGO gets amplified with the participation of the civil society. Reason being this, partner with Akshaya Patra to uphold the right to food and education of children. When you respect and work towards ensuring these rights to children, you directly impact and transform lives of millions of children. You instantly become the building block of better society. Act now!