Browse Articles  »  Business  »  Germany′s Economy Has Come to “The Verge of...

by Rudy P. SysAdmin at howtofindthemoney
No country went harder and faster with its renewable obsession than Germany. The rocketing power prices that inevitably followed are crushing its once thriving industries, including motor manufacturers such as Mercedes-Benz.
The idea that a critical input cost to manufacturing can be tripled without affecting profitability and employment is, as any student of that dismal science, economics might tell you, a nonsense.
Francis Menton takes a look at what happens when renewable energy rent seekers and eco-loons take control of energy policy, and with it the economic policy that underlies the success of any modern, industrial economy. Germany’s included.
Contrast Of Climate And Energy Policies, And Economic Results, In The U.S. And Germany
If you are reading your normal diet of “mainstream” press, you are getting hit with a constant barrage of climate alarm, together with a near total boycott on any good economic news for as long as Trump remains President. As a result, it is very easy to lose track of the widening chasm in the climate and energy policies, and also in the economic results, between the U.S. and its major European competitors. When you put some easily-available numbers together in one place, the contrast becomes very striking. For today, I will collect a smattering of relevant statistics, focusing on the U.S. and Germany.
And then there are the positions on these subjects of the candidates for the Democratic nomination for President. I find those positions beyond belief. 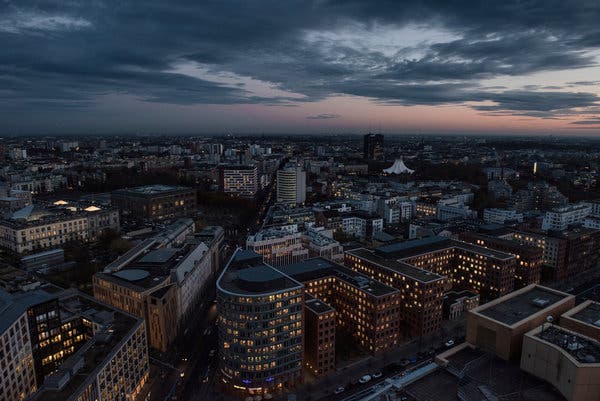 You probably know that the so-called “fracking” revolution in oil and gas production has led to a large increase in U.S. production of those fuels over the last ten or so years. The actual numbers are quite remarkable. On the oil side, according to data from the government’s Energy Information Agency here, in 2008 U.S. production of crude oil from all sources averaged 5 million barrels per day. By 2018, that figure had well more than doubled to 10.99 million bbl/dy. By contrast, crude oil production in Saudi Arabia in 2018 was 10.445 million bbl/dy (up from 9.261 bbl/dy in 2008), and in Russia was 10.759 bbl/dy (up from 9.357 bbl/dy in 2008). Of today’s U.S. production, some 59% — representing essentially all of the increase since 2008 — comes from so-called “tight” resources, meaning those that are produced by fracking.
The large increase in U.S. production has been accompanied by a correspondingly large decline in the price of oil and natural gas. Oil of the WTI (West Texas Intermediate) grade that traded at $110 per barrel in 2013 closed today at $59.12. U.S. prices for a gallon of regular grade gasoline, which reached a high of $3.90 in 2012, fell as low as $2.25 earlier this year, and are currently around $2.60. Natural gas prices are quite volatile, but were in the range of $4 to $6 per thousand cubic feet in 2014, and most recently $2.29.
In September, the U.S. became a net exporter of oil for the first time since the 1940s. The EIA expects that status to continue for the foreseeable future.
Over in the economic news category, the U.S. continues to thrive. Today, the Labor Department reported an increase in jobs of 266,000 during November, the unemployment rate down to 3.5% (lowest since 1969), and wages up 3.1% over a year ago. All of those must be considered excellent results.
And then there’s Germany. According to CleanEnergyWire here, Germany in 2018 imported 98% of its oil needs, and 95% of its gas. But doesn’t Germany have at least one good shale formation that could be developed? The answer is that Germany pretty much banned all fracking in 2017. They are still caught up in the Energiewende, or, in other words, the delusional idea that wind and solar power can replace fossil fuels within a few years. Nearly ten years into this, their carbon emissions have barely decreased at all, while emissions increases in places like China and India make any marginal decreases that Germany can achieve completely irrelevant. Meanwhile, they depend for their oil and natural gas on places like Russia and the Middle East.
GlobalPetrolPrices gives the most recent price of consumer gasoline in Germany as 1.385 euros per liter, equivalent to $5.807 per gallon. Admittedly, this cannot be blamed solely on supply restrictions; embedded taxes are also substantially at fault. But those embedded taxes are also part of the ongoing war against fossil fuels. German consumer electricity prices are also about triple the U.S. average.
And the economic news from Germany? It seems that the industrial sector is in the midst of a slump, in substantial part caused by the mad drive to force energy conversion without consideration of the costs. From the Daily Express, December 3:
THE GERMAN CAR INDUSTRY IS FACING DISASTER WITH UP TO 50,000 JOBS UNDER THREAT OR EXPECTED TO BE LOST BEFORE THE END OF THE YEAR IN WHAT HAS BEEN DESCRIBED AS THE “BIGGEST CRISIS SINCE THE INVENTION OF THE AUTOMOBILE”. LAST WEEK THE OWNER OF MERCEDES-BENZ ANNOUNCED PLANS TO AXE AT LEAST 10,000 EMPLOYEES GLOBALLY, TAKING THE NUMBER OF JOBS LOSSES BY GERMAN CARMAKERS TO ALMOST 40,000 THIS YEAR AS THE INDUSTRY SINKS UNDER A MASSIVE SALES SLUMP. DAIMLER WANTS TO SAVE £1.2BILLION IN STAFF COSTS AS IT PREPARES TO INVEST BILLIONS IN THE ELECTRIC CARS BOOM. AUDI, WHICH IS OWNED BY VOLKSWAGEN, HAS ALSO SAID IT WOULD BE SHEDDING ALMOST 10,000 PEOPLE – AROUND AROUND 10 PERCENT OF ITS GLOBAL WORKFORCE.
Trading Economics here states that German GDP “rebounded” to a growth of 0.1% in the third quarter, after a decline of 0.2% in the second quarter of 2019. Congratulations!
Meanwhile, among the Democratic candidates for President, the contest is between those who would ban fracking immediately and those who advocate some period of “transition” to some fanciful alternative. Bernie Sanders and Elizabeth Warren have vowed to ban fracking immediately. It’s not clear how they would do that, other than that they view the presidency in their hands as a dictatorship of unlimited powers. Then there’s the “moderate” Joe Biden, who said (yesterday) “I’d love to make sure we can’t use any oil or gas, period,” but then hedged that we would need some period to “transition away” from those fuels.
“Transitioning” away from fossil fuels — that’s what Germany is doing.
Extreme Green Poverty: Germans Face €44 Billion Bill For Electricity Alone In 2020
While wholesale electricity prices in Germany have increased by about 13 percent in 2019, taxes and levies on electricity have reached their highest level ever and will cost German families and consumers a staggering 44 billion euros in 2020.
The rise in electricity prices means that the rather minute reduction in Germany’s renewables surcharge will have no effect on the continuing rise in prices.
Wholesale power prices only account for 25% of the electricity price for consumers, while more than half of their bills is due to taxes, levies and surcharges, which will increase once again next year.
More than 340,000 German households had their electricity turned off last year because they couldn’t pay their electricity bills.
The 10 largest coal producers and exporters in Indonesia:
Click Here! Top Clean Coal Contractors for Power Plant, Gasification, Liquefaction and Emission Control System
Source: Stop These Things