Browse Articles  »  Environment  »  Fossil Fuels Have a Much Smaller Environmental...

by Rudy P. SysAdmin at howtofindthemoney
Eco-warriors are besotted with the myth that energy can be clean and renewable. The truth is that any "renewable" energy requires massive environmental impacts.
These impacts consume enormous amounts of environmental resources, which would make the most ardent environmentalist blush with shame if they only knew about them. Greens have so ensconced themselves in a humongous bubble of ignorance that it's doubtful if any but a handful know what I'm about to tell you.
And if that handful does in fact exist, they are keeping what they know to themselves as a closely held secret. Because if the truth got out, it would be the end of the environmental movement. 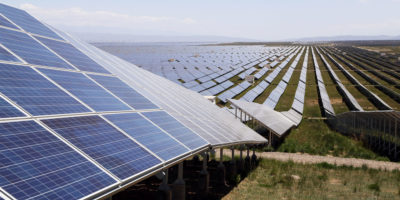 The vision of environmentalists is a peaceful, harmonious world in which human beings tool along on wind and solar energy alone, burn not an ounce of fossil fuel, and leave no human imprint on the environment at all. It's a beautiful, serene picture which has absolutely nothing to do with reality.
In this mythical world, the energy of the wind and the sun is captured and stored in batteries. There's your first problem, right there. As Mark Mills and Alexander Ackley write in The International Chronicles, "A single electric-car battery weighs about 1,000 pounds. Fabricating one requires digging up, moving and processing more 500,000 pounds of raw materials somewhere on the planet." If, however, you burned gasoline, you could deliver the same number of vehicle-miles over the battery's life span of seven years at 1/10 the total tonnage.
The green machines at some point must be decommissioned, which will generate millions and millions of tons of waste. By 2050, the International Renewable Energy Agency calculates that disposing of old solar panels alone will constitute more than double the tonnage of all today's global plastic waste. And waste is the word. A solar or wind farm that stretches as far as the eye can see can be replaced by a handful of gas-fired turbines, each about the size of a tractor trailer.
Both wind and solar require far more in the way of materials and land than fossil fuels. Just one wind turbine takes 900 tons of steel, 2500 tons of concrete, and 45 tons of plastic THAT CANNOT BE RECYCLED. Wind turbines last about 20 years, and since there is no way to recycle the materials, they have to be dumped in landfills. And with blades that are 120 feet long, they're too big for convenient disposal even there.
A wind farm in Minnesota trucked more than 100 of these monster blades to the Sioux Falls Sanitary Landfill in South Dakota. But the director of the Sioux Falls Public Works Department says they're done. "We can't take any more unless they process them before bringing them to us. We're using too many resources unloading them, driving over them a couple of times, and working them into the ground."
If a wind farm includes 100 turbines, that means there are 500 million pounds of concrete which has been poured into what used to be farmland. How is that concrete going to be disposed of?
There is not even a moderately inexpensive way to get the energy that wind farms generate to the cities which need them. Cities are built near flat farmland, while the wind blows on high ridge lines.
And there are health hazards to these giant bird blenders. Germany, which is shifting radically to wind, has discovered these wind farms produce so much noise that, according to one poor unfortunate soul, it "drives you insane at night." Germany is actually now paying hush money to people who live near these farms. They're getting direct handouts from the government essentially to keep quiet. So the turbines can keep making noise, but the people can't.
Building enough wind turbines to supply one-half the world's electricity needs would require nearly two billion tons of coal to make the concrete and steel, and two billion barrels of oil to make the composite blades. We'd consume immense amounts of hydrocarbons in a radically stupid attempt to avoid consuming hydrocarbons.
Well, at least that leaves solar as an environmentally friendly, sustainable, and renewable source of energy. Except of course for the MINING of silver and indium, which will jump 250% and 1200% respectively in the next several decades. Demand for rare earth minerals required for the manufacture of solar panels will rise 300% to 1000% by 2050 to meet the goals of the Paris Accords.
The production of electric cars will require a 2000% percent increase in the production of cobalt and lithium. This will require mining operations in remote wilderness areas with a high degree of undisturbed biodiversity, which is where the cobalt and lithium are found.
One of the dirty secrets is that wind farms must be heavily propped up with taxpayer subsidies because no one in his right mind would build one otherwise. Warren Buffet, for instance, owns MidAmerican Energy. Said Buffett, "On wind energy, we get a tax credit if we build a lot of wind farms. That's the only reason to build them. They don't make sense without the tax credit."
Engineers joke about discovering "unobtanium," a magical energy-producing element that "appears out of nowhere, requires no land, weighs nothing, and emits nothing."
Bottom line: "clean, renewable" energy is neither. It's an environmental disaster. Fossil fuels, on the other hand, are readily accessible, affordable, and have a much, much smaller environmental footprint than all renewables. Gentlemen, start your engines.
The 10 largest coal producers and exporters in Indonesia:
Click Here! Top Clean Coal Contractors for Power Plant, Gasification, Liquefaction and Emission Control System
Source: Renew America