Browse Articles  »  Computers  »  Fortnite Oro: Who is it and Their Role in...

Fortnite Oro: Who is it and Their Role in Fortnite Season 2

Season 2 is going to release in February 2020, and it is gaining popularity from the starting with the new character and the bomb “Ka-Boom!!” In this article, you can know about the Golden masked character Oro.

As being a new update, everyone is wondering and speculating about what this new Season has been hiding. The latest teasers worked as per the reputation and teased the players of the game. One new character that has been seen the teaser is the Fortnite Oro, which is a skeleton made of precious metal Gold. It has the crown similar to the Statue of Liberty (but made of Gold), with some other assorted bling. This undisclosed character is creating a buzz around the community of the players of the game. The gaming community is hyped about how this character will be tied into the theme and storyline of the game in the upcoming Season. Here are some speculations about the character and how it will be attached to the game. 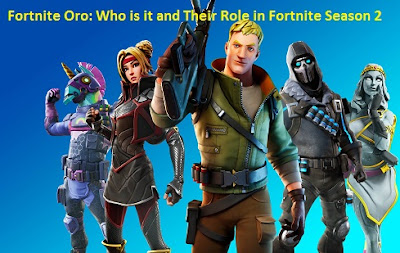 Source: Fortnite Oro: Who is it and Their Role in Fortnite Season 2

Introduction of The Fortnite Oro

It is the new skin for the gaming characters of the rarity of the Legendary level. It is not officially released character skin, which has leaked in the game. This character is going to have the battle pass of tier 100, and it will going to be the reward to start playing the second Season. The Gold plated skeleton may have some more relevance to the character or the storyline. Such as when it comes to the teasers, there is a constant display of Gold in many ways such as showing off the skin which is Gold, and the mention of Au (which is a chemical representation of the metal Gold). This teaser is released in the twitter account handle of the game Fortnite (@FortniteGames). This excess of gold symbolism doesn’t stop here, in every poster of the season 2, there is a mark of the Golden hand. This excess of Gold may signify that in the new Season the metal gold is going to play a significant role. So word of advice, don’t waste your gold bars and other objects of Gold in a disoriented manner, Keep them to yourself and only use when it is necessary.

There are also some rumours regarding the origin of the character too. This speculation may be related to the name of the character “Oro,” which is the Spanish word which means Gold. The handprint in every poster is signalling that it can be related to the Greek mythological story of King Midas. According to the myths, the king has a godly power that can change anything into gold just by touching them. As the story goes, the end was ruthless for the king.