by Rudy P. SysAdmin at howtofindthemoney
Gasification processes require an oxidant, most commonly oxygen; less frequently air or just steam may suffice as the gasification agent depending on the process. Oxygen-blown systems have the advantage of minimizing the size of the gasification reactor and its auxiliary process systems. However, the oxygen for the process must be separated from the atmosphere. Commercial large-scale air separation plants are based on cryogenic distillation technology, capable of supplying oxygen at high purity1 and pressure. This technology is well understood, having been in practice for over 75 years. Cryogenic air separation is recognized for its reliability, and it can be designed for high capacity (up to 5,000 tons per day).
Cryogenic Air Separation Unit (ASU)
Cryogenic distillation separates oxygen from air by liquefying air at very low temperatures (-300°F). Ambient air is compressed in multiple stages with inter-stage cooling then further cooled with chilled water. Residual water vapor, carbon dioxide, and atmospheric contaminants are removed in molecular sieve adsorbers. Cooling to cryogenic temperatures is achieved by heat exchange with product gases as well as after-coolers and expanders. The air then enters the "cold box," which contains a distillation column with many stages, and an argon column for additional oxygen purification.
Oxygen and nitrogen products are warmed by heat exchange with the cold box feeds and pressurized by compressors to the final delivery pressure. Alternatively, products may be pressurized by small boost compressors. Oxygen storage may be advisable to ensure steady gasifier operation through periods of high oxygen demand.
Nitrogen may be released at low pressure to atmosphere, or compressed to high pressure and used as a byproduct or as a diluent for a syngas/hydrogen fired turbine. An elevated-pressure nitrogen stream may be useful in integrating the ASU with the gasification plant. ASUs can also be used to separate other useful industrial gases like argon, neon, and krypton. 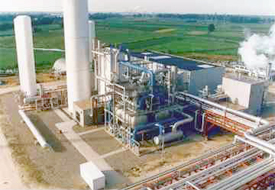 Aerial view of a typical ASU plant
The ASU may be integrated with the power island, within the gasification complex, to improve its overall efficiency and reduce costs. The NUON IGCC plant, at Buggenum Netherlands, for example, was designed with such integration. Elements of integration, for example, include:
These types of integration, however, do add complexity to the design and operation of the gasification plant.
Major Technology Providers
The air separation market is dominated by a small number of highly competitive companies who are willing to offer lump-sum-turnkey systems for a project or even build and operate a plant near the client's project site and supply the needed oxygen 'over the fence' under a long-term contract. Providers of large-scale ASUs include, but are not limited to: Liquid Air Engineering, Airco, Air Products and Chemicals, Praxair, BOC Gases, Air Liquide, and Linde.
The 10 largest coal producers and exporters in Indonesia:
Click Here! Top Clean Coal Contractors for Power Plant, Gasification, Liquefaction and Emission Control System
Source: US National Energy Technology Laboratory