Can Amla guide the tourists home? 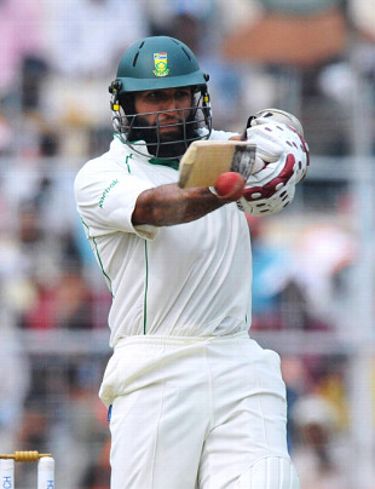 The cruelty of sport cannot show up more starkly. Everything that Hashim Amla has built so far in the series, every patient, gritty minute he has spent at the crease for his 416 runs, stands to fall apart if he fails on Thursday. And, with a sunny day forecast, India's primary aim will be to get rid of the batsman of the series.
For Amla, the challenge couldn't be any bigger: with just three more specialist batsmen for support, and two of them - Ashwell Prince and JP Duminy - struggling for form, he will have to come up with something special if South Africa are to snatch the No. 1 ranking from India.
Amla has done everything that has been asked of him so far in India: in Nagpur, when South Africa's series got off to a terrible start, losing the openers with only six runs on board, Amla retained his composure and, with Jacques Kallis, built the rest of the innings brick by brick. His unbeaten 253 set South Africa on the road to victory, which was completed by Dale Steyn's awesome swing bowling.
Even in Kolkata, but for Amla's century on the first day, South Africa's chances might have been washed away by now in the Hooghly. While his 114 was peppered with some aggressive and streaky strokes, today Amla came out more assured. It was evident in his strokeplay as he countered swing, spin, bounce, flight and some sledging without any fuss.
Not once was he tentative. He got his eye in instantly and played with a freedom that can only come out of confidence. As the Indians grew desperate and tried to attack Amla replied with some aggressive strokes that forced MS Dhoni to spread his field. Kallis, whose 57-run partnership with Amla had soothed some frayed nerves in the South African camp, said the pair's positive intent had affected India's strategy. "They were probably trying to defend as well as take wickets and we need to keep doing what we did today," Kallis said.
Kallis said in Amla, South Africa possessed the best pilot to see them to safety. "He is mentally very strong, has good powers of concentration, knows his limitations and knows his gameplan very well and executed it very well." Amla has had some experience already of being involved in a few rescue acts. In the first Test of the 2008 series in England, South Africa had been forced to follow-on. Only Ashwell Prince had shown some character in the first dig with a stubborn century. But second time around the visitors bounced back strongly with centuries by the opening pair of Graeme Smith, Neil McKenzie and Amla. Even if McKenzie led the fightback on that occasion, Amla's knock was an important one, too, considering he had to survive for a similar duration (as in Kolkata), against a bouyant home side. The England fast bowlers tried unsettling him with incessant short stuff, but Amla remained unflappable and unbeaten as South Africa escaped with a draw. It was an important result as Smith's men gathered confidence from that effort and eventually won the series 2-1.
The only difference now is the roles are reversed with Amla needing to lead the resistance. Of the batsman remaining, de Villiers already has a fifty in the series so he would not sweat as much as Prince and Duminy who have been out-of-touch so far. But both men have played some fighting knocks in the recent past. Prince hit a spirited century in the final Test of the Australian series at home two years back in the absence of Smith. Duminy announced his abundant talent in his first two Tests including a 166 at the MCG which helped South Africa to become the first team to beat the Aussies at home in 16 years.
"It is also an opportunity for Ashwell and JP to turn their form around," Kallis said, adding South Africa have the wherewithal to survive the Indian challenge. "There is no reason we can't survive 90-odd overs. The guys have good gameplans and if we can just keep positive and keep the pressure on India anything can happen."
But Amla holds the controls and Kallis said he can't now afford to lose it. "He has been in fantastic form. The biggest lesson of all when you are in good form is don't give it away."
Source: https://www.espncricinfo.com/