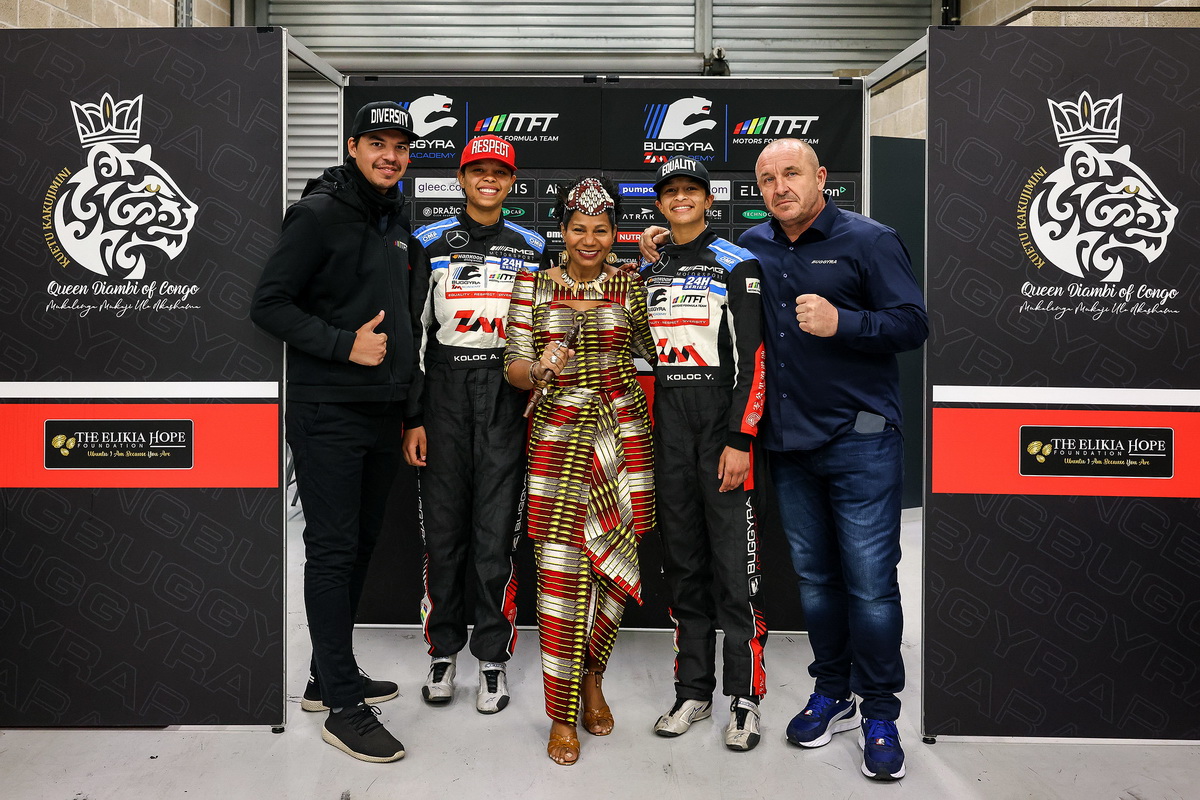 And it has just recently received big support from the HM Queen Diambi Kabatusuila of Congo. She is the traditional queen of the Order of the Leopard of the Bakwa Luntu tribe.

Diambi Kabatusuila Tshiyoyo Muata, as is her full name, is a queen of the ancient native tribe living in the Democratic Republic of Congo. She is also a crowned queen of a one-million strong diaspora living in Brazil.

She feels to be very close to Aliyyah and Yasmeen Koloc. “I used to sport as well in the past, and I’m a black woman. That is why I understand that it’s not so simple for such girls to live in Europe or America. Also, in many sports, including Motorsport, it’s difficult for women to find their place in general. If you’re a woman, with African ancestors, you need to prove yourself first, because people usually do not believe in you,” said the queen during the 12 hours of Spa-Francorchamps race weekend. The Belgian circuit is close to her heart, as her mother comes from this country. Her father was a Congolese diplomat.

“I want to support women not just in racing, but also to get into the roles of managers, race engineers or mechanics. And not just women, but minorities as well, so the world of Motorsport becomes more inclusive and diverse,” explains Diambi Kabatusuila.

And these efforts are very similar to the spirit of the Buggyra Academy, which aims to support all talented individuals in the world of Motorsport, no matter where they come from, socially or ethnically.

Two years ago, one pleasant lady started to work with Ludovic Pezé and the MFT team. „When he began working with Buggyra, the ladies had arrived with them. That was amazing for me. I don’t feel like being their idol, but I try to support them and stand by them. I know what they must be going through,” she realises.

And the queen remembers her first meeting with Aliyyah and Yasmeen Koloc very well. “It was a few months ago, and we found a common ground right away. I know that Mr. Koloc has not just Czech roots, but also ancestors from the native people of the Pacific Ocean. And I’m the queen of a native African tribe, so we’re connected through our desire to show the legacy of our ancestors,” explained the well-educated woman, who fluently speaks several languages.

What also has helped the queen in her relationship with the girls is a fact that she studied psychology: “I work a lot with young people, so I can understand their worries and fears. From the very beginning, I was talking to Aliyyah and Yasmeen very openly, like I was their aunt.”

“Right now, is important for people to see what we can achieve. It’s a collective effort. In Africa, we use the word ‘ubuntu’ which means ‘I am because you are’. Of course, it’s not just about minorities but the integration and unity in general. We all work together to put these thoughts across,” added the determined queen of the Bakwa Luntu tribe.