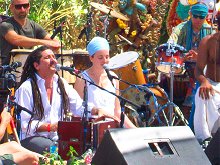 I heard about this famous yoga festival at the yoga studio, and just decided to do myself a favor and take a retreat up to Joshua Tree, California, for some desert transcendence. It was also a great occasion to get out of town with the RV, and explore this new world (for me) of tribal yoga.

Bhakti is one of the eight limbs of yoga: the Yoga of Devotion, traditionally practiced as a celebration of god in all its forms, mainly through music and dance. Because this particular BhaktiFest fell on Mother's Day weekend, they dubbed it "ShaktiFest" in honor of the Feminine Principal, Shakti.

I have developed an interest in Kirtan music--a style of call-and-response music with chanting, usually in Sanskrit. Although original forms of Kirtan were quite strict about instrumentation: tablas, sitar, harmonium, hand cymbals, and others; the Westernized versions include electric guitars, synthesizers, bass and drums--a sort of kirtan-rock fusion. At this ShaktiFest there were the traditional instruments used in most acts, but for most of the headliners, bass, drums and guitar delivered slow, funky grooves with soaring vocals, simple chord changes and lots of singalong. Dancing is considered an honoring of the music, so everyone dances as they chant, and it is very liberating. Great fun!

The temperatures during the day were in the 90s on the Central California high desert, but cool breezes and cool attitudes, plus low humidity helped create an aura of high-vibe floatingness--indeed, even the young children and babies all seemed to be in a constant state of meditation.

I reluctantly left Monday morning with a wonderful meditative glow or bhav (ecstasy), with the distinct feeling I'd truly found my tribe.

Vibrant Living Tip: BhaktiFest is held 3-4 times a year at diverse locations in the U.S. Check out BhaktiFest.com for the latest info.