Call of Duty: Warzone has various types of weapons for players to use, and among all these SMG guns are fastest in the game. Call of Duty: Warzone broke several records like a storm, and that is why it is necessary to know every small detail about the game while playing. Call of Duty: Warzone is more like a realistic game that allows players to do what they want to win the game through tactics and strategy. In the warzone total of 150 players play at the same time to change the scenario of violence and war. Every player has their favorite gun what they find in the warzone, and most of the time, for faster shooting, players prefer to use SMG guns. 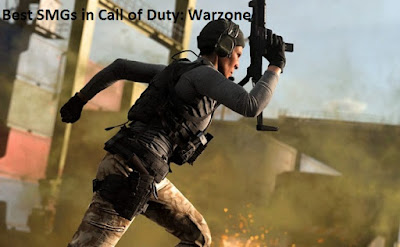 For survival in Call of Duty: Warzone, you need a gun, but to win the game, you will require that gun you can handle. SMG guns easy to use and fast in the shooting. Their aiming is accurate and does have much stability than assault rifles guns. What makes SMG power is its speed and accuracy, where its power and equipment are decent. Their ammo is easy to available and can be easily over if it does not shoot on the right spot. Now here are the list top 3 SMG guns you can use to win the match.

MP5 has its own identity in Call of Duty: Warzone because of it one of the deadliest SMG guns available in the game. Despite the fact, it’s not easily available because it can only be obtained through quests and crates. It’s a rare edition of a gun that can attach with powerful equipment. Its deadly shots can cross any armor of enemy and complete health before even knowing what was happened. Players who love MP5, they just love it, and it is their first preference to use even if it is hard to find.

Until you find MP5, another best option can be MP7, and no doubt it a perfect example of an alternative deadly weapon of Call of Duty: Warzone. Unlike MP5, MP7 is easy to available on the map. It is one the best weapon to use, and there is no second thought about it before picking it up. Its variety of dominant attachments, and even without the accessories, it is super deadly in the warzone. It can kill an enemy in the blink of an eye because of its firing speed and power. For all these reasons, it is one of the best SMG guns that players use.

Beyond any uncertainties, P90 is the best gun in Call of Duty: Warzone. It can easily execute the enemy from its faster firing rate and power stats. It requires stellar magazine along with it its stability is also awesome. If you want a deadly weapon in Call of Duty: Warzone, then P90 is the best choice. However, it is rare in the map, but if you find it, then you can easily win the match with your shooting skills and its deadly power.