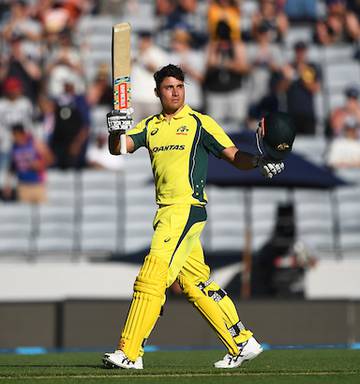 Half-centuries to Jess Cameron and Shelley Nitschke kept Australia in the series as they snatched a two-wicket win from the final ball of the first ODI in Queens town. Chasing New Zealand's 228 for 6, Australia were in difficulty a couple of times before the tail-enders Erin Osborne and Julie Hunter were able to seal a thrilling result.

Australia's chase was healthy when Nitschke was in charge, but she departed for 51 as part of a collapse of 3 for 3 that left them at 90 for 5. Sophie Devine (2 for 63) had picked up Sarah Elliott when she forced Nitschke into a catch for the wicket keeper Rachel Priest.

The game seemed over but Cameron turned up and kept the visitors in sight of the total, with them needing 27 off the final four overs. However, Ellyse Perry departed for 27 and Cameron went in the penultimate over for 68 off 81, leaving Osborne and Hunter seeking 16 from nine deliveries. They whittled down the target and wanted four off the last ball, with Hunter finding the boundary off Devine.

New Zealand had struggled to 85 for 5 after winning the toss but life became easier once Victoria Lind was joined by Sophie Devine. The pair put on 74 in 15.3 overs before Lind was out for 68 off 100 and then Devine sped forward with Nicola Brown as the innings concluded.

Devine, who has been a big problem for the Australians, was unbeaten on 74 off 82, with two sixes, while Brown had 26 off 24. Perry had the best figures with 2 for 44 of 10 while Sarah Andrews, Hunter and Nitschke gained one victim each.

New Zealand have ruled the Twenty20s, winning all five at home and away over the past month, but Australia took their recent advantage in the 50-over games to 6-0. New Zealand currently lead the home Rose Bowl series 2-1, following their Twenty20 successes, and the second and third ODIs will be played in Invercargill on Saturday and Sunday.