by Rudy P. SysAdmin at howtofindthemoney
The power sector is often seen as a prime target for using green hydrogen to power turbines, but as the share in global CO 2 emissions of the power sector is less than 40%, it is vital that it penetrates other sectors as well. Today, there is probably no economically viable business case for producing hydrogen specifically for having it re-electrified directly afterward in a hydrogen-capable gas turbine—and efficiency wise, today it would not make sense either, because there are more applications with higher CO 2 reduction potential at lower total cost. But for pilot applications or in a vastly decarbonized world, to further decarbonize the power sector, beyond what can be achieved by installing more renewables, green hydrogen can realize long-term, seasonal power-to-power storage on a large scale.
Re-electrification will be achieved in hydrogen-capable gas turbines, engines, or fuel cells to provide security of electricity supply in periods of low renewable energy supply, such as lack of wind. This use case will become attractive in the mid- to longer-term. It is not an either-or situation, hydrogen (in cars and trucks) can help to decarbonize the mobility sector, decarbonize the industry sector (for example in steel production), and the power sector later. 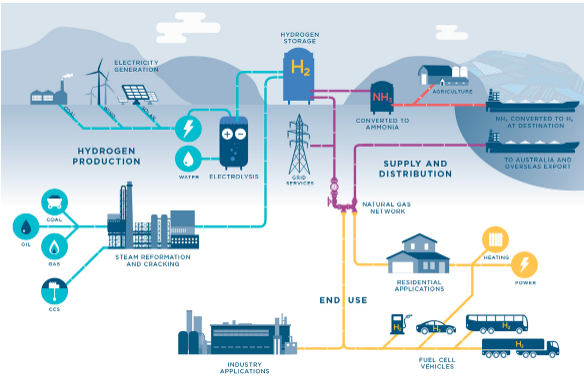 More than half of global emissions come from industry, transport, or the built environment, so solutions need to be offered to decarbonize those sectors. Traditional renewable energy sources such as wind, solar, and hydro will play their part, but there is also a significant role for hydrogen produced from renewable energy and water, whether used directly or combined with chemicals to create green methanol and green ammonia. These chemicals can be stored, transported, and used in all kinds of sectors as synthetic fuel or fertilizer.
There is keen attention on the transportation sector and there are signs that it could be among the early adopters, especially when it comes to buses, trucks, and trains. Hydrogen fuel cells are already being used for regional trains, which will replace diesel-powered engines. In China, South Korea, and Japan, there is promising growth in cars with hydrogen fuel cells and electric drive trains in cars. In this region, it has been helped by research funding that has increasingly focused on fuel cells instead of batteries. Also, German original equipment manufacturers (OEMs), which are intensively focused on batteries, are developing cars and trucks with fuel cells.
There was a time over the past decade when several automotive OEMs were looking into both fuel cell and EVs, some of them prioritizing fuel cells. The cost of developing two revolutionary concepts in parallel may have driven some to focus mainly on EVs, but now OEMs are returning to the idea of fuel cells. It seems that they are beginning to understand the challenges and limitations of batteries in vehicles.
New development is also being seen in China, where in recent years EVs were supported massively, bringing high growth to the industry. The “Ten Cities, Thousand Vehicles” program that propelled EVs in China is being replicated now for hydrogen transport in cities such as Beijing, Shanghai, and Chengdu.
Going forward, green hydrogen will command a premium price when compared to its less environmentally friendly hydrogen counterparts—blue and grey. The early stages of any technology curve must have some support, much as was seen in the early days of wind and solar power. But in the medium- to long-run, hydrogen must and will stand on its own legs and be viable without external support. When exactly that will happen, depends on several factors, including the adoption rate, economies of scale, and the regulatory frameworks.
The 10 largest coal producers and exporters in Indonesia:
Click Here! Top Clean Coal Contractors for Power Plant, Gasification, Liquefaction and Emission Control System
Source: Power Magazine