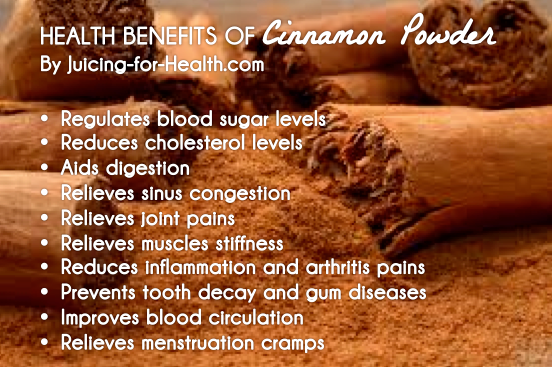 2.Cinnamon can lower your bad cholesterol (or LDL

4. Cinnamon can treat the symptoms of Alzheimer’s and Parkinson’s disease.

Cinnamon has an anti-fungal and anti-microbial property so it helps to enhance the complexion. Take a small banana, yogurt, cinnamon, and lime juice and mix all in a smooth paste. Apply on a clean face and leave it for 15 minutes, then wash with lukewarm water.

Cinnamon can soften rough and dry skin because of its rich antioxidant properties.

Cinnamon is also used to treat pain. Cinnamon reacts with prostaglandin that helps in contraction and relaxation of muscle.

Cinnamon is a warming herb and used to cure cold and the flu.  When cinnamon is added to ginger tea, it works wonders.

Arthritis causes pain and swelling in the joints and cinnamon helps reduce the symptoms up to a very good extent.

How Should I Add Cinnamon to My Diet?