Browse Articles  »  Computers  »  Ruby on Rails - Is there any future?

Ruby on Rails - Is there any future?

Ruby on Rails (RoR) is widely used by developers across the world to build robust internet applications and content management systems. The full-stack framework is developed based on Ruby programming language, while allowing developers to create pages and applications using an independent routing system, without relying on the web server. RoR further supports several widely used software engineering principles and patterns like model–view–controller (MVC), don't repeat yourself (DRY), and convention over configuration (CoC). 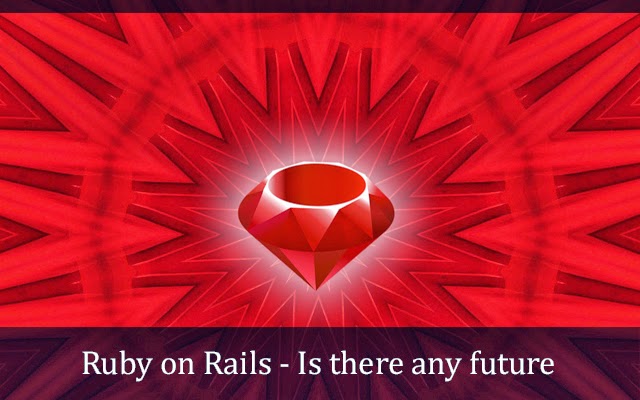 However, each internet application developer, nowadays, has option to choose from a variety of commercial and open source web application development frameworks. So the open source framework must complement the ongoing and emerging trends in web development to beat competition. However, many reports have highlighted that developers will opt for Ruby on Rails in 2013 and 2014 to avail several benefits.

Developers, nowadays, have to create robust web applications within a stipulated timeframe. So they explore ways to avoid lengthy and repetitive coding. RoR supports convention over configuration that enables developers to avoid repetitive coding. Also, they have option to adopt agile development methods to plan and execute the entire project within a short span of time. The framework also makes it easier for project manager to break down the larger projects into smaller parts. So the developer can always deliver richer user experience by including fresh and innovative features in the application.

Unlike conventional web application development frameworks, RoR offers more flexibility to developers. The programmers can avail the feature to customize and modify an application according to the specific needs of the customer. In addition to making modifications, the programmers can further add new functionality to optimize the application to meet the changing business needs.

Despite being providing flexibility and development speed, RoR is still an open source technology. As the web application development is available freely, it can be used by the large as well as small and medium enterprises. Also, the developers can use the framework to optimize the application’s performance, security and speed without using any commercial tools. So RoR will remain popular among the developers and users who want to curtail development cost by avoiding non-open-source and proprietary technologies like Java and .NET.

A constant increase is noted in the number of enterprises adopting agile methodologies of project management. These principles help enterprises in reducing project cost and time, while delivering high quality and user experience. Unlike other web application development frameworks, RoR fully supports agile methodology. Further, the shorter development cycles makes it easier for developers to apply agile principles to the application.

Many reports have highlighted how the applications developed on Ruby on Rails are more secure. Further, security patches have been added to the framework based on the security issues raised by users. The latest version of the platform called Rails 4 comes with security fixes for all the vulnerability issued highlighted through the Github hacking case of 2012. Rails 4 include loads of inbuilt security features that a developer can avail and implement properly to provide a comprehensive security cover to his internet application.

Like other open source technologies, RoR is also supported by a large community of Ruby developers. The highly active and responsive members of the community help developers to avoid writing additional code for regular functionalities. At the same time, the developers can join the community to keep track of the extensions and enhancements, along with accessing the new documentation. As RoR is emerging as a popular web development trend, many developers are learning the innovative technology. The gradual increase in the number of passionate programmers will make it easier for enterprises to switch to RoR.

In addition to building internet applications, Ruby is also used by many banks and insurance companies to evaluate their frameworks thoroughly. The framework allows the application to be tweaked or changed in a flexible, effective and efficient way. So the programming language is used widely to test and optimize the performance of an application in a given infrastructure. The scope for innovation provided by the programming language enables RoR to complement the emerging trends in web application development and testing. You can get in touch with a ruby on rails development company who can help you develop applications which are stable, scalable and secure.