Browse Articles  »  Computers  »  Python - Why is it a Real Contender in Big Data...

Python - Why is it a Real Contender in Big Data Arena?

As an open source, high level programming language, Python does not need any introduction. The general purpose programming language is used widely by programmers to create a wide range of software applications. The clean object-oriented design and extensive support libraries of Python increases the productivity of software developers. At the same time, Python is also considered by businesses as the best option for creating mission critical and big data applications in a distributed environment. The significance of dynamic programming language in the big data arena can also be determined from the fact that the original version of Google’s web crawler was written in Python. 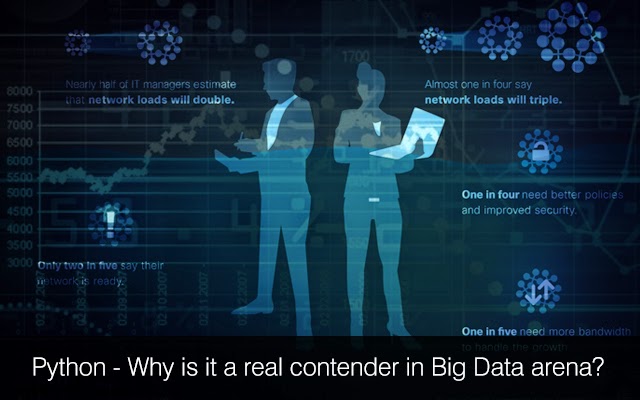 Python allows developers to create web services easily by invoking COM or CORBA components. The programming language further allows programmers to call components directly to and from the code written in Java, C or C++. At the same time, Python also supports the common data formats and internet protocols. In addition to providing powerful process control capabilities, Python also processes XML and other markup languages. The programmers also have option to create internet application by embedding Python like a programming language. The feature makes Python effective in supporting and processing a wide variety of commonly used data formats.

Many Python developers use JIT compilation to increase the programming language’s speed and performance. Like Java Virtual Machine (JVM), the JIT compilation detects only the specific bytecode that are under execution as hotspots. For instance, the Python programmer can use the alternative interpreter provided by PyPy to execute the Python code without any alteration. The framework can effectively execute the original Python code with average speedups of 6.3x. However, PyPy cannot be used effectively for creating numerical applications as it does not support Numpy arrays fully. So the developers have to additionally use numexpr as a JIT compiler to evaluate all complex numerical expressions at a rapid pace.

Libraries to Analyze and Manipulate Data

The Python libraries help big data applications in analyzing and manipulating a huge amount of data. The latest applications also require the data scientists and business analysts to use agile tools to effectuate the data analysis and manipulation. As a powerful language, Python can be used by these professionals to resolve complex problems in any domain. Further, they have option to integrate Python with their existing IT infrastructure. So the Python-based big data applications can effectively analyze and manipulate large amount of data in almost all domains.

However, many businesses are still skeptical about the significance of Python in the big data arena due to the poor performance of pure-Python applications. But the users still have option to overcome the disadvantage by linking Python with library extension written in other programming languages like C and FORTRAN. Also, the business can avail the benefits of certain open source projects to optimize the speed and performance of Python by compiling it into native code. The innovative projects further make Python the best programming language to write mission critical and big data applications. You can get in touch with a custom python development company who can help you develop web apps that are stable, scalable and secure.