Launch X431 IV Auto Scanner is the newly auto scanner from LAUNCH, which improved the features and function based on all feedback from the user’s served by the X431 in their respectively fields of works. Compact Smartbox , main unit, printer, powerful diagnostic functions, fast and convenient update, universal 16PIN connectors, make it the first choice for technicians. X-431 IV Auto Scanner is the standard equipment for technicians.

Launch X431 IV is an classic,economical,simple,steady vehicle diagnostic tool newly released by Launch. It follows the open platform of X431 series, also it inherits many advantages of X431 including a wide coverage of vehicle models, powerful testing functions and accurate test data. At the same time,the unique rotatable diagnostic connector design is convenient for use's operating.It's a cost-effective diagnostic product on the market.

Attention: All the languages do not support to all the car modules, some modules only have English Version, please pay attention to it.

* Appearance: The Launch X431 IV Auto Scanner has a new designed and cover made from high quality materials to stand in a new market.

* Connector: The Launch X431 IV Auto Scanner has a new connector to replace all CAN Bus and OBD Connector called OBDII 16E connector.

* Power source: The X-431 IV Auto Scanner can support 12V and 24V means not only small vehicles but also big vehicles can tested. 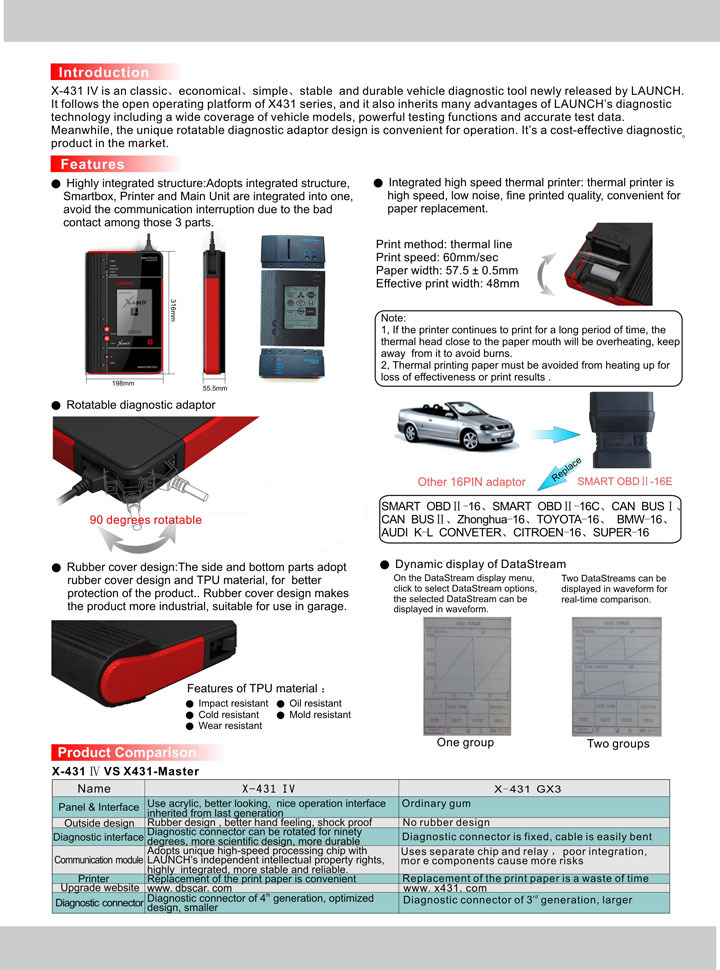 Q: The accessory between X431 IV and Master can be used universally ?

A:Can not,because the connector of the main USB cable is different.

We also have other  products such as launch x431 master, launch x431 gds,launch x431 GX3 and so on. If you think they are useful to you,please contact me. I will try my best to solve your problems.