How Can I Play Blu-ray Disc/BDISO /BDMV folder on 11-inch or 13-inch MacBook Air?

by Steven Joen Blu-ray Player “There is some way available for playing Blu-ray on iMac, what you need is a external BD drive and Mac Blu-ray Player Software, is the way also apply for the Macbook Air? Can we Play the Blu-ray on the latest Macbook Air?” The MacBook Air family is a line of ultraportable Macintosh notebook computers created by Apple Inc. The Air was designed to balance both performance and portability; it has a full-sized keyboard design and a machined aluminium casing with extremely low weight and thickness. The MacBook Air is available in two sizes: 11.6 inch and 13.3 inch (or 29.46 cm and 33.78 cm, respectively). The MacBook Air has no built-in support for Blu-ray discs. Blu-ray players use a different type of laser than CDs and DVDs, and data is stored more compactly. The differences are internal, so placing a Blu-ray disc in your MacBook Air will not damage the drive, but it also won’t allow you to view your movie.

Despite a lack of Blu-ray drive and native blu-ray playback support, you can still play Blu-ray movies on 11-inch or 13-inch MacBook Air. Today, I would like to introduce a new way to play your Blu-ray on Macbook. And what you need is a kind of third-party software named UFUSoft MacBook Air Blu-ray Player Software which is specially designed for Macbook Air. 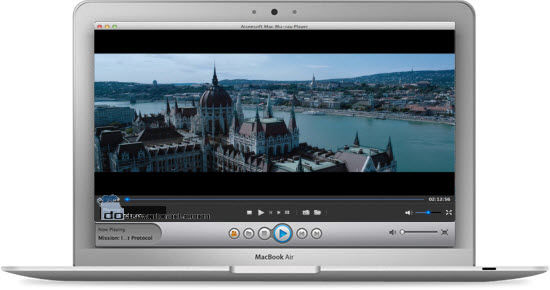 3. Blu-ray Player software(UFUSoft MacBook Air Blu-ray Player): It is such a reliable software which can port DTS5.1 for Mac initially in the world. It also allows you to play AVCHD video and a large number of other multimedia files, including WMV, MPEG, MP4, MTS, MKV, FLV, AVI, etc.

You have to have an external bluray driver. Connect it to MacBook Air via USB interface

After confirming your hardware matches the requirements above, simple install Macbook Air Blu-ray Player and insert your disc in the drive, and this program will play automatically..

Open the Blu-ray disc. Some Blu-ray discs will be launched automatically, others can be opened by open buttons.

There are two open buttons: “Open File” and “Open Disc”.

When you play Blu-ray disc, just click on the ‘Open Disc’ button and select the Blu-ray disc in the pop-up dialogue. After a couple seconds of loading, you can enjoy the Blu-ray movies on Mac freely. Otherwise, you can press “Open File” button to play Blu-ray ISO files or videos on Macbook Air in other media formats.

I think it would be the simplest way to lead your 11-inch, 13-inch MacBook Air to the extremely Blu-ray world.