by Ram Prakash Forging Products The Forging Industry in India didn’t observe a very bright performance in the past few years which lead to concerns being raised about its future.  However, diversification plans being considered lately, show a better picture with considerable improvements in the industry’s revenue over the next few years.

The Indian Forging Industry: An Overview

The Indian forging industry wasn’t really contributing much to the GDp of the country till before Maruti-Suzuki’s entry. The open and close die forgings that the second hand steam hammers produced managed to meet the minimum requirements of the times. Emphasis was majorly on creating broad shapes through the process of metalworking and finial sizing being done through the process of machining. The entry of Maruti-Suzuki however marked a watershed for the forging industry in India. 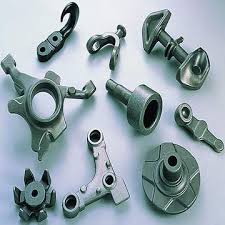 The Japanese collaborations helped India access the latest tooling technologies using which it was able to match shoulders with the European quality of forgings. Establishment of warm and cold forging units helped manufacture forgings with close dimensional control (precision forging). The manufacturing process approach adopted by the Indian forging industry also transformed from being rigid to flexible.

There are a total of 419 forging manufacturers in India, with clusters located in Andhra Pradesh, West Bengal, Jharkhand, Karnataka, Delhi, Haryana, Tamil Nadu, Gujarat, Punjab and Maharashtra. The west is leading with presence of 159 units and production contribution of 40%. The north follows with 157 units accounting for 36% of the production. South’s 81 units manufacture 16% of the total production followed by East which has 22 units accounting for 8% of the production. About 93,400 people are employed by these 419 entities, both directly and indirectly.

As per the Association of Indian Forging Industry (AIFI), although the total capacity of the 419 units is about 3.7 million tones, the production during the year (2012-13) was about 2.1 million tones only. 70% of the produce is used by the commercial vehicle industry, closely followed by tractor industries and multi-purpose vehicle industries.

The Indian Forging Industry is expected to increase its sales by 8-10% in the next two years (FY15). Although the forging parts manufacturers in India have been primarily dependent on the automotive industry, diversifications into other sectors are also being considered. This is to help spread the industry’s revenues over a wide region and reduce its dependency on the automotive industry alone.

Industries being incorporated in the plan include railways, defense, oil and gas which will be contributing to the revenues of the Indian Forging industry over the next two years. The mining sectors in Andhra Pradesh, Karnataka, Goa and Orissa are also being looked upon as potential areas of revenues.

What are your opinions on the future of the Indian Forging Industry? Share them with us in the comments below.