An optical fiber is a flexible filament made by pure glass or plastic fiber used to transmit the light. There are two types of fiber: single mode fiber (SMF) and multimode fiber (MMF). Each kind of fiber includes several categories. Different category supports different transmission speeds and wavelengths. So there must be suitable optical transceivers connecting with related fibers for the network applications. The article tells about some categories of SMF and MMF and the associated interface type of transceivers.

Types of SMF and Associated Transceivers

The common SMF is defined in ITU G.652 standard. ITU G.652 is non-dispersion-shifted single mode fiber (NDSF). This fiber is optimized in 1310nm range. In order to eliminate the problems encountered by transmissions in the third window, other fiber types were developed. Dispersion-shifted fibers (DSF) with a zero dispersion at 1550 nm were defined in ITU G.653. Thus, attenuation is minimized so that longer distance cables are possible. However, even though this fiber type eliminates the problem for transmissions of single wavelengths at 1550 nm, it is not suitable for wavelength multiplexing applications as WDM transmissions can be affected by another non-linear effect called four-wave mixing. This brought non-zero dispersion shifted fibers (NZDSF) in the ITU G.655 standard. For this fiber type, the zero dispersion is shifted just outside the C-Band, usually around 1510 nm. This helps limiting the chromatic dispersion as the zero dispersion remains close enough to the transmission band.

For SMF applications, there are various of transceivers to be used. These transceiver interfaces are defined by IEEE 802.3. They are used to transmit at 1310nm (ITU G.652) and 1550nm (like ITU G.653) wavelengths for long-haul transmission applications. The following figure shows us the different single mode fibers and associated interface types of transceivers. 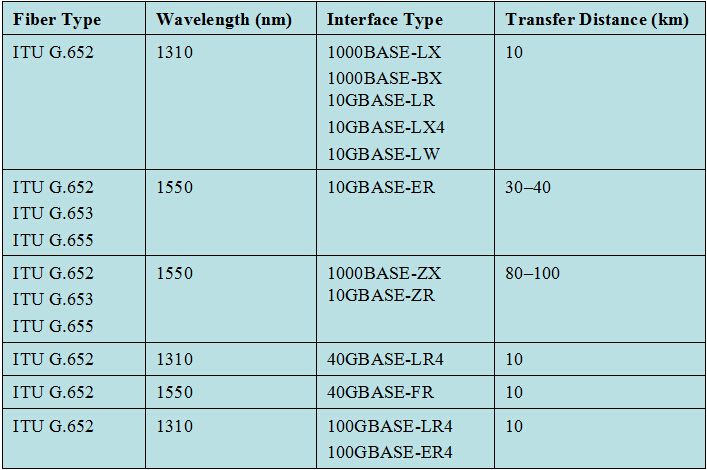 Types of MMF and Associated Transceivers

Like SMF, there are also corresponding transceivers applied with MMF. The differences are wavelength and transfer distance. For MMF is suitable for short distance transmission at the wavelengths of 850 nm and 1300 nm. Figure 2 shows the different types of MMF and associated interface type of transceivers. 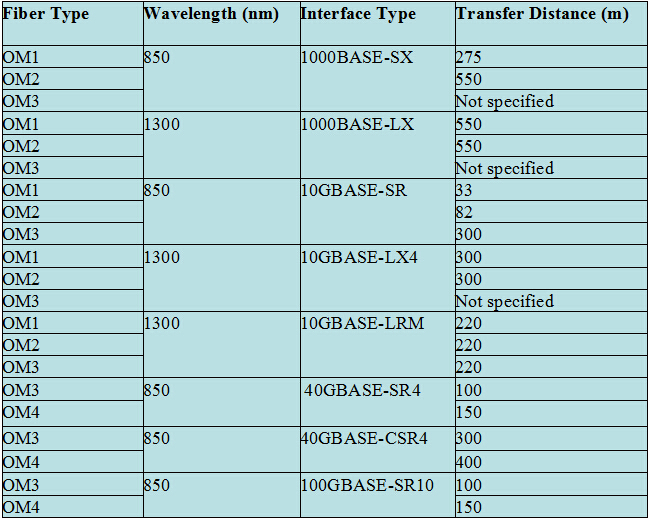 Fiberstore offers a full line of single mode and multimode fiber cables for all network applications. There are also a wide range of optical transceivers, such as SFP, SFP+, XFP, 40G QSFP and PON transceiver. All the transceivers can be connected with either SMF or MMF. And you can have the flexibility to custom the cables and transceivers to fit your specific requirements.