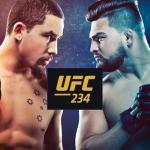 On Saturday night (Sunday evening nearby time), Sam Alvey will walk into the Octagon for the seventeenth time. His rival, main residence legend Jim Crute, will show up. In any case, when "Smile'n" got the consider offering him a battle "Down Under," he didn't falter.

Addressing Sherdog at the UFC 234 media day, Alvey talked energetically about his third battle on Australian soil, why he supposes Crute could be a power at light heavyweight, and battling out of the blue on pay-per-see.

"I cherish Melbourne," he said when gotten some information about his involvement in the state's capital up to this point. "I've adored each city I've battled in Australia. It's route greater than I thought it was. We landed and were taking the bus from the airplane terminal to the lodging, and resembled 'this is path greater than we thought it was' It was somewhat of a very late battle, so we didn't have a ton of time to take a gander at stuff. It was just about getting my visa and ensuring I could arrive in time."

"I was in Canada cornering a decent companion of mine - Chris Curtis - who won coincidentally," he said of how he realized there was an open door on the UFC 234 card. "I got a call [from my manager] saying 'hello, you got offered a battle in Australia' and I said 'we should do it, we're in'. I got back to and said 'I have to check my weight first' and I went and ventured on the scale, and I'm similar to 'I'm OK, we're great' before I knew it I was around here."

"For me it doesn't so much make a difference who the adversary is," he explained. "It's me, I train constantly. I comprehend what I'm great at, I know how I need the battle to go on my end. With the goal that's what I re-center [on] Me and the mentors, we like where I'm at.